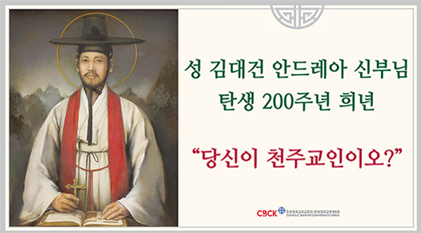 Quoting the first letter of St. John, "love is of God" (1Jn 4,7), Bishop Kim said, "We still cannot overcome the situation of divided nation because of our egoistic love for each other in our respective ways. Therefore, we have to love our neighbors, following exactly the example of God who loves us."

Bishop Kim indicated some signs of change in last years. North Korea and the U.S. have been approaching to a better mutual understanding. North Korea has been trying to pave the way to renovation and opening for the economic rebuilding through the solution of the nuclear problem.

Bishop Kim urged both South and North Korean governments to have a sincere dialogue, giving up one-sided claims and old ways. He also pointed out the problem of Saeteomin (North Korean escapees settled newly in South Korea) and urged the faithful to exert effort for them to experience the love of God before they learn about the dire culture of South Korean society.

At conclusion, Bishop Kim said that the reunification of two Koreas must be a moment of the preparation for the future of our nation, not just a momentary event. He also urged the faithful to live a life of prayer, forgiveness, and reconciliation to manifest the divine love in the Korean history.

The Arrival of New Apostolic Nuncio in Korea

The Most. Rev. Osvaldo Padilla came to Korea to assume his office as the new Apostolic Nuncio in Korea on June 13, 2008. At the Incheon International Airport he was greeted by the Most Rev. Peter Kang U-il, Bishop of Cheju and Vice-President of the CBCK, the Most Rev. Andreas Choi Chang-mou, Archbishop of Kwangju, and the Most Rev. Hyginus Kim Hee-joong, Auxiliary Bishop and Vicar General of Kwangju Archdiocese, among others.

Archbishop Padilla said, "I know very well the fact that the Catholic Church in Korea not only shows the dynamic and vitality taking rank among the best of the world, but also has the potential to develop further in the future," expressing his great expectation and interest.

Bishop Kang bid the new Apostolic Nuncio welcome saying, "I am especially happy that we have an Apostolic Nuncio from an Asian country." Then he also said that the accession of Archbishop Pedilla to his office must be also a great gift for the community of Filipinos living in Korea.

The CBCK Committee for the Reconciliation of the Korean People held the 15th Meeting of the Division of Aid for North Korea at the conference hall of CBCK on June 10, 2008. The committee decided that it will provide extra foods for North Korea in the spirit of humanitarian aid.

As a concrete action plan, the committee decided to initiate a fund raising campaign in the Week of Novena (June 17-25) around the 2008 Prayer Day for Reconciliation and Unity of Korean People (June 22) in each diocese and ecclesiastical organization.

At this meeting, Mr. Noh Ok-jae, Director of Research Department of Peace Foundation, gave a lecture with the title "The situation of recent food shortage in North Korea and our role." According to him, North Korea needs 1.4-1.8 million tons of food this year. Mr. Noh also said that North Korea needs 200,000 tons of food as emergency aid from outside just to survive the anticipated food crisis of June and July this year.

Rev. John Kim Hun-il, Executive Secretary of the Division, said, "The situation in North Korea will go out of control next year, if the starvation continues. Therefore, the faithful should set an example of fraternal love to open the exchange between two Koreas and an aid channel."

Rev. Thomas Shin Ho-cheol from Chuncheon Diocese said, "It is very sorry that our society shows less interest in North Korean brethren than in Myanmar or China, which are recently stricken with natural disasters like cyclone and earthquake respectively, even though there is a plausible rumor that a massive starvation will happen in North Korea in June or July this year."

Rev. Timothy Lee Eun-hyung, Director of the Committee for the Reconciliation of the Korean People of Uijongbu Diocese, said, "The seriousness of the food shortage in North Korea becomes hidden by the tumultuous domestic political situation of South Korea and the problem around U.S. beef import." Then he said, "Therefore, the faithful in the Church should take initiative to prevent the tragedy of starvation, recognizing the serious situation in North Korea."

By the way, religious and social leaders held an extraordinary press conference on June 2, 2008, and issued a statement of appeal to help North Korea with 200,000 tons of food aid. The leaders of the Catholic Church in Korea are among those who take initiative in such aid.

The Committee for Family Pastoral Ministry of the CBCK decided to establish 'Family Safeguard Award' at the meeting held at the 2nd Conference Room of the CBCK on June 11, 2008. This award will be conferred to an organization which dedicates itself to the sanctification of family, as a part of the promotion of good example of the sanctification of family. The 1st 'Family Safeguard Award' will be conferred on December 30, 2008.

On the other hand, the Committee decided that the aim of the family pastoral ministry next year is to promote the sanctification of family centering on "multicultural family," helping the multicultural families to overcome the difficulties and to realize the importance of family.

Rev. Benedictus Song Young-oh, Secretary of the Committee, said, "one out of eight families in Korea is multicultural. The pastoral care of the Church for such families must be actively promoted, as the number of multicultural families increases drastically in Korea."