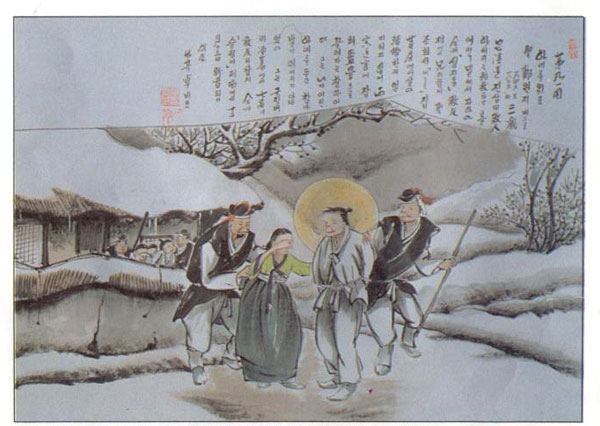 Choung Woun-ji Peter was born in 1845 of a very devout Catholic family at Chinjam in Ch'ungch'oung Province. When the persecution of 1866 broke out, he was an orphan. His father had previously been martyred, and his mother had also died. Peter left home, moved to Soungjidong village in Chounju, and lived in a rented room at Cho Peter's house. He was 21 years old and was married when the persecution of 1866 broke out.

When he was tortured to reveal who taught him religion, he said that his only religion teacher had been his martyred father. The interrogators were surprised that Peter would dare to believe the religion which actually caused his father's death. Peter said that he believed the Catholic religion in order to meet his parents in Heaven. He was tortured but he showed no sign of weakness.

On December 13, 1866, nine days after his arrest, Peter was taken with his fellow Catholics to the execution site at Supjoung-i in Chounju. On their way one of the execution officials, who was drunk, ridiculed Peter and cursed Heaven. Peter responded, "What a fool you are! It is like cursing your own father and mother!"

All the Catholics who were brought to the execution site looked very happy and peaceful and were saying prayers. Peter was beheaded at Supjoung-i in Chounju on December 13, 1866. He was 21.