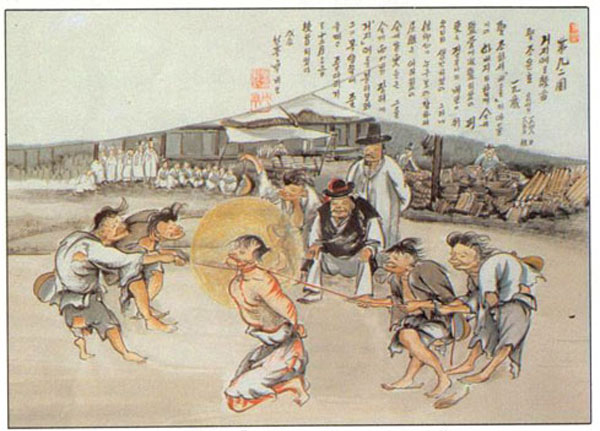 Joseph Cho Yun-ho was born in 1848. When the persecution broke out, he was only 17. Since Joseph had just been married for a short time, he and his wife were living with their parents. Joseph's faith was very deep and he observed all the Church regulations faithfully.

Young Joseph resembled his father and was very courageous and outspoken. The whole family practiced their religion faithfully.

When his father, Peter Cho, was arrested and interrogated, Joseph was coming home. Peter asked his son to run away, but Joseph gave himself up. Both father and son encouraged each other not to abandon their faith.

Joseph told the interrogators that his grandfather had taught him the Catholic religion. He also told them that he did not have any Catholic books. They tortured him severly to make him deny his faith, but Joseph would not succumb. He was sent to the Jeonju prison with his father.

Joseph strongly and courageously defended his faith despite all the tortures. One day as he saw his father being taken out for execution. Joseph asked to be taken out too, but he was told that according to the law father and son could not be executed on the same day in the same place. The governor urged Joseph to give up his faith. He promised Joseph that he would all his lost properties back to him if he denied his faith. Joseph wouldn't listen to him.

On the way to the execution site, the executioner ran fast, pulling the wooden board around Joseph's neck to make him tired.

At the execution site, the governor offered again to restore all his lost properties, but Joseph strongly refused the offer. He ate his last meal, making the sign of the cross very devoutly before eating. Joseph was beaten very severely, and finally was beaten to death at Seocheongyo in Jeonju on December 23, 1866. He was 19. Thus three generations, Cho Joseph, his father and grandfather, had the honor of being martyrs.