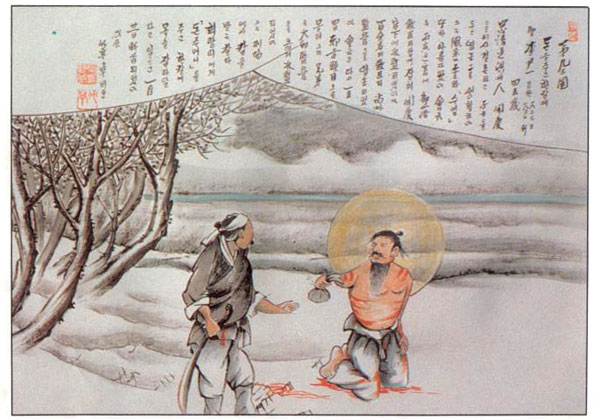 Yi Yun-il John was born in 1812 at Hongju in Ch'ungch'ong-do. He later settled down at Mungyong in Kyongsang Province. He farmed for a living. He was married and had some children. When the persecution broke out, he was 45. John was tall and had a large beard. He was known for his devout faith and simple character. His family was traditionally Catholic and produced many catechists. John tried his best to keep his family traditions.

According to the testimony of John's son, between November 7 and December 6, 1866, John was sitting in his room, when the police approached his house. He knew that they were coming. He could have escaped, but he did not. To those searching for Catholics John said that he was a Catholic but knew of no other Catholics in his neighborhood. Of 30 or more arrested with John on that day, 8 belonged to John's household. They were all put in the Mungyong prison. Since the governor was absent, there were no interrogations, but his captors tortured John and looted all his possessions. The Catholics were sent to the Sangju prison three days later. In Sangju John was interrogated three times. Each time, John admitted that he was a Catholic but knew no other Catholics excpet those captured with him. The district government official urged John to deny God, but John strongly withstood his persuasion.

The official finished the interrogations and divided the 70 Catholics into three groups: the first group was made up of those who had children and those who had abandoned their faith; the second was a group of 20 who refused to deny God; the third group made up of leaders like John. The Sangju official, after having consulted with the Lord Regent in Seoul, sentenced them to death on January 4, 1867.

The Catholics were tortured again and sent to Taegu (Kyongsang Province). Before his departure to Taegu John was so happy that he said to his children: "I now leave to become a martyr. You return home, worship God faithfully and follow me when you grow up."

John showed good examples to his cellmates. He dedicated himself to prayer and encouraged his fellow Catholics to be steadfast to their faith.

On January 21, 1867, he was taken out to a suburb of Taegu, ate his last meal and gave all his money to his executioners. He was finally behead and received the heavenly crown. He was 45 years old.