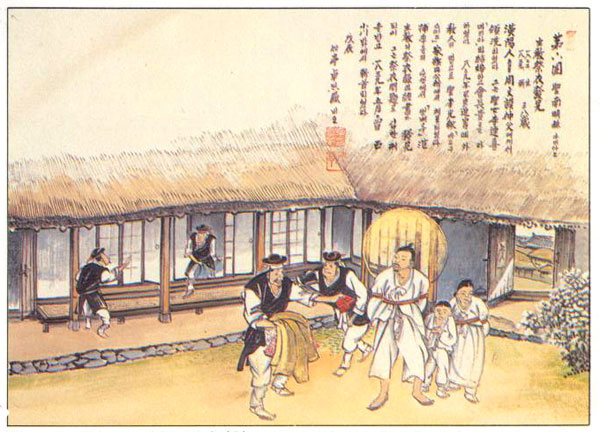 Damian Nam Myong-hyok was born in 1802 to a noble family. He led a prodigal life with bad companions when he was young. When he was about 30, he learned of the Catholic religion and began to practice it. When the Chinese priest Father Pacificus Yu Pang-je came to Korea, Damian was baptized by him.

He became a catechist and taught people in his house. He took care of neighbors and sick people and tried to baptize pagan children in danger of death. People respected him. One day someone asked him what he wanted to be called in the everlasting life. Damian said: "I would like to be called Damian Nam the martyr and a member of the Holy Scapular Society."

In early 1839, the persecution started. At the accusation of an ill-natured catechumen, 53 Catholics were exposed, particularly catechists Yi Augustine and Nam Damian. They were arrested immediately with their families. Bishop Imbert's vestments, mitre and breviary, which Damian had been in charge of, fell into the hands of the captors.

Damian was more severely interrogated because of the bishops' possessions. Damian told the police chief that the religious articles belonged to Fr. Zhou Wen-mo, who had been martyred in 1801, not to the French missionary bishop. The police chief knew that Damian was telling a lie, but pretended to believe what Damian told him, because he was inwardly afraid of the magnitude of possible trouble that might arise if he arrested the foreigner.

The police chief interrogated Damian more severely in order to intimidate others.

"You gave false testimony. The bishop's vestments and mitre are fairly new. How can you say that those things belonged to a man who died 40 years ago?"

Since Damian refused to deny his religion and reveal the names of other Catholics, he was severely tortured. His bones were broken. He was so severely beaten that he was unconscious for four days. But thanks to God he recovered consciousness.

After Damian was sentenced to death, he wrote a letter to his wife in prison. "This world is nothing but an inn we pass through. Our real home is Heaven. Follow me and become a martyr. I wish we could meet again in the kingdom of eternal glory," the letter said.

On Friday, May 24, 1839, Damian was taken outside the Small West Gate and beheaded with eight other Catholics. Damian never ceased praying until his head was cut off, according to a witness. Damian was 38 years old when he was so gloriously martyred.