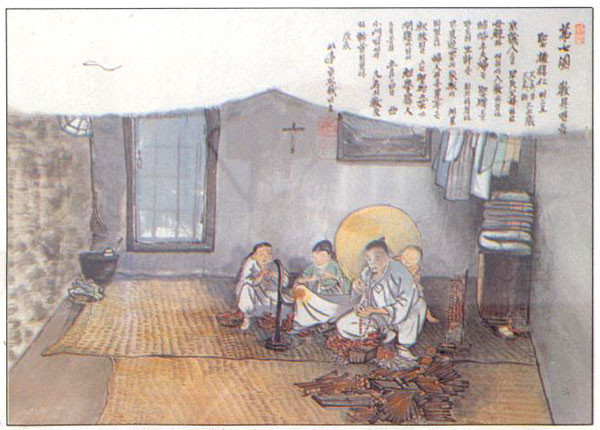 Kwon Tug-in Peter was born in 1805 in Seoul, to a Catholic family. When he was a child, he lost his father. His mother, who had been a devout Catholic, died when he was 16 years old. His mother's good example made him a wonderful Catholic. He used to get up even before the first cock crows and pray until daybreak. He was known to be kind to everybody.

After his mother died, he married. He first worked at his brother's herb shop, but later he had a small business for his livelihood. He was poor, but he did not complain. After he moved to another place, he made crucifixes and holy medals not only for his livelihood but also for church expenses.

When the persecution started in 1839, he was arrested with his family on January 16. Peter showed his rosary to the captors in order to tell them that he and his family were all Catholics. Thus they became the first family to be arrested during the persecution of 1839. Bishop Imbert, who was near Suwon, was informed about the arrest and returned to Seoul to console and encourage the discouraged Catholics.

They were investigated and tortured in various ways. Peter's wife and his brother-in-law, who could not endure the tortures, denied their faith and were released. Peter, who was still in prison, wrote them to change their minds. According to the testimony of his daughter-in-law, Yi Agatha, his wife acknowledged the mistake of her apostasy and repented.

Peter was very severely interrogated by the police chief.

"Why do you believe the Catholic religion?"

"We all must thank God, who is the Creator of angels, men and all things that exist on earth. Everybody must worship Him."

"Reveal the names of your fellow Catholics."

"I cannot do it because my religion teaches not to do any harm to others."

Peter was tortured severely, and the police chief ordered Peter's fellow inmates to beat him. They beat Peter so badly that he was almost dead twice. According to a record of the Criminal Court, one of the reasons for his death sentence was the fact that Peter made and sold religious articles.

Peter was finally beheaded outside the Small West Gate on May 24, 1839, at the age of 35, with eight other Catholics. It is said that his face had a mysterious smile even after his head was cut off.