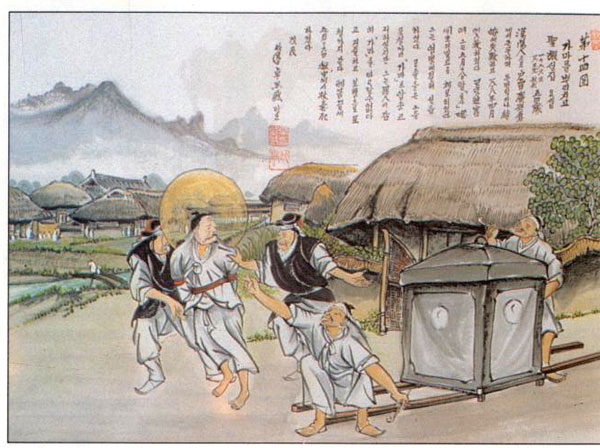 Chang Song-jip Joseph was born to a pagan family in Seoul. He worked at a herb shop. He married twice, but lost his wives early. At the age of 30 he began to study the catechism. But Joseph could not believe the doctrines of the Incarnation and the virgin birth. He could not believe that God humbled Himself to become a man for the love of mankind.

Unable to solve the problem of doubt, Joseph abandoned the study of the Catholic religion, and was interested only in making money. However, one of his friends was a Catholic, and he persuaded Joseph to return to God. Joseph repented his past fault. He indulged himself in prayer, meditation and scripture readings. He abstained from meeting his friends and lived a solitary life. His friends asked him why he did not do business. He used to reply that he would rather suffer hunger and cold for the sake of God and everlasting happiness than have worldly wealth.

Joseph was baptized and confirmed on the same day in April 1838. When he heard about the courageous martyrs, he was moved so deeply that he wanted to give himself up to the government authorities, but his godfather stopped him from surrendering himself.

He was actually arrested on May 18. Many of his neighbors, friends and captors urged him to deny his religion. On the contrary, he taught them the Catholic doctrine. He taught that one had to love God, Who created everything on earth and would send good men to Heaven and bad men to Hell.

The police chief finally sent him to the higher court. Since he was not immediately interrogated, Joseph demanded to know why they left him alone without interrogations and tortures. He was misunderstood as a crazy man and was sent back to prison. Joseph did not obey the police chief, who was demanding that he deny God. He was beaten with a cudgel at least 20 times and sent back to prison. A few days later, on May 26, 1839, he died in prison in Seoul. He was 54 years old at the time.