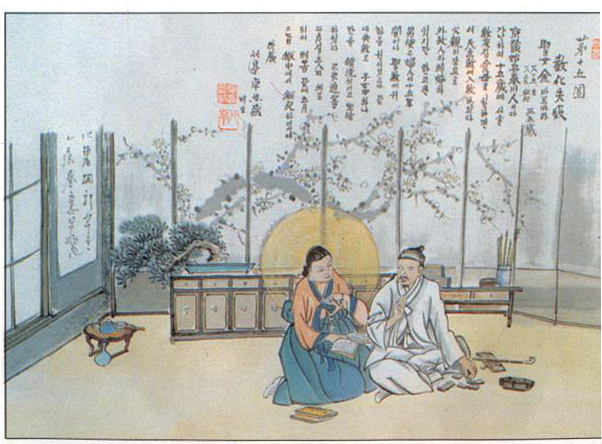 Saint Kim Barbara was one of those who died of disease while in prison. According to Hyon Sok-mum Charles in the "Diary of the Persecution of 1839", over sixty people died of torture and disease in prison.

In fact, while the pain of torture was terrible, every day prison life was even worse and unbearable. There were many who bravely witnessed through all forms of torture, but finally gave in because of the hunger and thirst. Given no more than two fistfuls of rice a day the prisoners were often reduced to eating the dirty straw they lay on. Also, with a large number of people crammed into the small cells, it was inevitable that disease would break out and spread very quickly. Bishop Daveluy, who would himself later die as a martyr, wrote of the prison situation: Our Catholics were packed in so tightly that they could not even spread out their legs to sleep. Compared to the suffering of imprisonment the pain of torture was nothing. On top of everything else the stench from their rotting wounds was unbearable and in the heat typhoid would break out killing several in a few days.

People like Kim Barbara suffered the extremes of prison life. Those in prison worried most whether they would live long enough to claim the glory of martyrdom from the executioner's sword.

Kim Barbara was born to very poor family in Kyonggi Province. Her family was Catholic, but not very devout. At the age of thirteen Kim Barbara was sent as a servant to the wealthy Catholic family of Hwang Maria. It was there she spiritually met God and her devotion for Jesus grew. She was forthright and diligent, inscribing in her heart the teachings of the Lord. Very much aware of the Lord's grace in her life, she was determined to remain a virgin.

One day her father came to tell her that a match had been made for her with a young Catholic man.

"It is very good match and we have already agreed to it so you must now prepare for marriage," he told her.

"It is my wish to preserve my chastity for the Lord."

"If husband and wife are both believers there are no obstacles for a faithful life and this match will be advantageous for you, so do not be so obstinate," her father responded and she had no choice but to agree to the marriage.

However, it turned out that her husband was a pagan and all her efforts to convert him were of no use. She had several children of whom she only managed to baptize a daughter. Differences in faith created many difficulties between the couple and these problems were never resolved. After her husband's death she was able to devote herself to prayers and good works.

With the arrival of foreign priests in the country she was able to lead a more fervent and happy spiritual life. Barbara was arrested in March, 1839, and subjected to torture, but she refused to apostatize or reveal the name of other Catholics. During the three months of her prison life she suffered from torture, hunger, thirst and disease. On May 27th, 1839, Kim Barbara died of typhoid fever lying on the dirty mat of her cell at age of thirty-five. She was beatified on July 5th, 1925 and canonized on May 6th, 1984 at Yoido, Seoul, by Pope John Paul II.