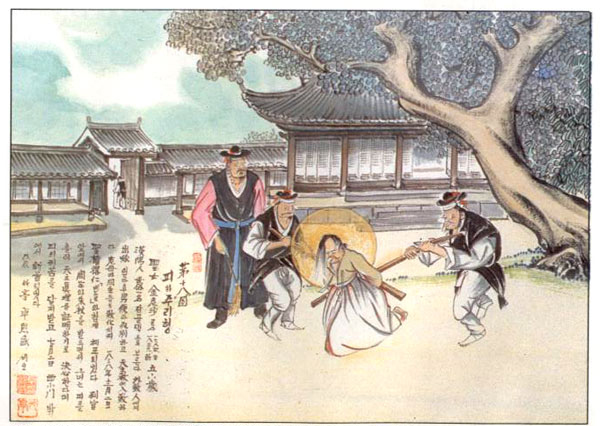 In June 1839, Cho Pyong-ku who had a pathological hatred for Catholics took control of the Korean government. On July 5th, a decree came down to completely eradicate the Church. The first to be martyred after this decree were eight Catholics who were already in prison. Of these Kim Rosa was the first to have been arrested.

Kim Rosa was born in a non-Catholic family in 1784, Hanyang. She was married, but she and her husband subsequently separated. After the separation Kim Rosa went to live with a Catholic relative and this was her first contact with the Church. Although it was late in her life she happily applied herself to learning the doctrine. She was intelligent and could communicate well so she was able to make others understand the value of her belief. She taught her mother and older brother the truths of the faith helping them to repent of their past. Thus the family was able to live in harmony, practicing the teaching of the Church.

Kim Rosa lived according to her faith, examined her conscience frequently, repented her sins and prayed constantly. She had high respect for priests and did all she could to help them. She was a model to other Catholics.

On January 16th, 1838, in the middle of the night, the police surrounded her house but she did not show any concern. Happy that at last her time had come, she went to prison calling on the names of Jesus and Mary. She never betrayed her faith, but testified to all in the prison. Even the guards were impressed by her attitude. However, she could not avoid the fury of the government. When she first appeared before the judge he displayed all the instruments of torture before her and said,

"Criminal Kim Rosa, before we use these instruments to break your leg and lacerate your flesh, give up your God and report the names of other Catholics."

"Judge! I cannot give up my God. He is the Creator and Father to all of us. He loves virtue and punishes sin, so how could I abandon Him? Harming others is also a sin. A long time ago I decided to shed my blood for these truths. Do as you please."

"Listen to me, criminal. Your religion's doctrine has been forbidden by our king, yet you still insist on belonging to that Church?"

"My body is now in the hands of the king but before that it belonged toGod. We are all God's sons and daughters. How is it that Your Excellency does not know this simple fact?"

The judge was furious and had her tortured before sentencing her to death. The sentence was carried out on July 20th, 1839. She was fifty-six years old. Kim Rosa was beatified on July 5th, 1925 and canonized on May 6th, 1984 at Yoido, Seoul, by Pope John Paul II.