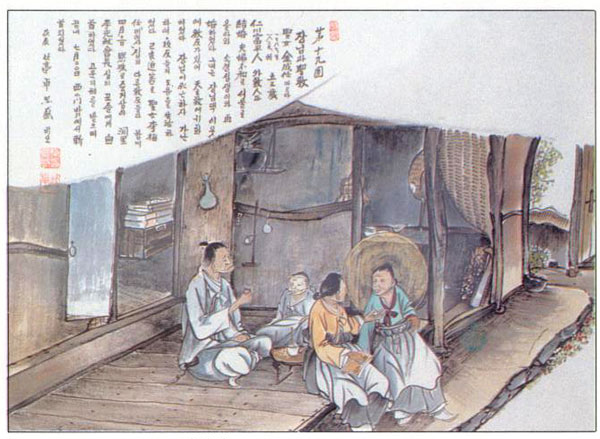 In the "Diary of the Persecution of 1839", Saint Kim Song-im Martha is referred to as Pup'yong House, a title referring to the fact that she was married to someone from Pup'yong.

Kim Song-im was a 50-year old pagan widow. Her husband was of a very uncompromising temperament and they did not thave a peaceful relationship. This was before Kim Song-im became a Catholic. The situation became so bad taht she had no choice but to separate from her husband. She left quietly and went to live in Hanyang. There she met and lived with a blind man who made a living by telling fortunes. At this stage she was over fifty but she still had not learned about the Catholic faith.

One day she heard about the God and His Only Son, Jesus, from a Catholic who was living in the same house. With this encounter she began to believe in God and her faith grown eventually.

Life with her blind husband had been difficult but when he suddenly died Kim Song-im Martha's future looked bleak. Some Catholic came to her aid. Martha began working in the houses of the Catholic firneds to repay their help. It was during this period that her faith grew deeper and she repented of her past sins, her inability to put up with her first husband and her subsenquent living by superstition. At times Martha felt deep sorrow but in her total dependence on the Lord she came through her depression The concern and Christian example of the other Catholics made her realize and confirm how great is the love of God.

One day Martha was with Yi Magdalena, Yi Theresa and Kim Lucy talking about the persecution, the courageous martyrs and the happiness of Heaven. They were so deeply moved by the love of God that all decided to give themselves up to the government authorities to profess their faith.

They wanted to do mortification and sacrifice following the cross of Jesus Christ. The Hisotry of the Catholic Church in Korea says: "Voluntary surrrender is not in accordance with the ordinary rules. However, it might have been evoked by divine grace, or God might have given His tacit approval to them, because the women were steadfast in their faith and wanting to be witness of God by being martyrs. There are other laudable examples in church history, such as St. Plollina, St. Aurelia and others."

By the end of March or in the beginning of April of 1839 these courageous women went to the police station and told the police to put them in prison because they were Catholics. To the unbelieving policemen they showed their rosaries. The police tied them up and put them in prison. Therefore, it can be easily understood that these pious women courageously endured all tortures and pains for the love of God.

The police chief interrogated the women.

"Do you believe that the Catholic religious in the true religion?"

"Of course, we do. Otherwise we woudln't be here."

"We can never deny God. Even if we have to dies."

"Are you not afraid of turtures?"

"You are wasting time in persuading us to deny God. We surendered ourselves for the sake of God. How can we deny Him? We will die if required by the law of the country, but we can never deny God."

They were repeatedly and severly tortured. The courageous women were sent to the higher court, where they were interrogated atain.

"Do you still believe that the Catholic religion is the tru religons?"

"Yes, we do. We worship God, and we are determined to die for Him."

The police chief tortured the women more severly than others to punish them for surrendering themselves. But they didn't succumb to him. They were finally sentenced to death.

According to the government Sungjongwon Diary, these four pious women and four otehr Catholics were beheaded outside the Small West Gate on July 20th, 1839. Martha was 53 years old, when she was killed for her faith.