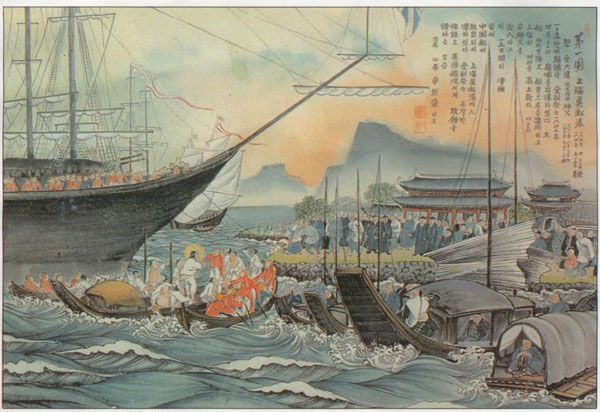 Kim Tae-gon Andrew was born on August 21st, 1821, in Solmae, Naepo, Chungchong Province. His great-grandfather, Kim Chin-hu Pius, was the son of a famous noble family in Solmae and once was an official of the regional government. About 1788, when Kim Chin-hu was 50, his son, who was Catholic, urged him to be baptized. After baptism in about 1788, he resigned from office and dedicated himself to a life of faith. Very soon, he was arrested during persecution and sentenced to death. He spent more than ten years in prison and died there on February 20th, 1814. His grandson Kim Chae-jun Ignatius lived in Solmae with his wife Ko Ursula who gave birth to Kim Tae-gon. Kim Chae-jun Ignatius was martyred on September 26th, 1839.

Kim Tae-gon, who was born into this family of martyrs, was a man of excellent intelligence and strong personality. He was also a man of deep faith. When he was young his family moved to Kolbaemasil in Kyonggi Province in order to escape the severe persecutions. Father P. Maubant, one day, visited his village in 1836 and chose him as a seminarian. He was 15 years old at that time. Along with two other seminarians, Ch'ae Pang-je Francis Xavier and Ch'ae Yang-op Thomas he was taught by Father Maubant. The seminarians were sent to Macao where they arrived on June 7th, 1837, after six months of travel.

The missionaries of the Far Eastern Procure of the Paris Foreign Mission Society in Macao welcomed the first young Korean seminarians. They studied theology, Latin, geography, history, French and many other subjects. Father Legregois wrote to Father Maubant as follows:

"Ch'ae Pang-je Francis Xavier is very quiet but a deep thinker and a gentleman. Ch'ae Yang-up Thomas is meek, precise and wholehearted. Kim Tae-gon Andrew is active but precise, obedient but daring, and has strong will power. He is a very promising young man. He is eloquent and his judgement is good, enabling him to solve problems quickly and easily. Although they have been here only a few months, they can communicate in simple Latin and French."

One of them, Ch'ae Pang-je, died in Macao in 1838. In 1842, Kim Tae-gon left Macao as an interpreter for Admiral Cecile on board a French war ship. He happened to be present at the signing of the Nanking Treaty. After Admiral Cecile returned to France, Kim Tae-go? tried to enter his homeland with Bishop Ferreol through the strictly guarded northern frontiers but all his attempts failed.

Kim Tae-gon was ordained a deacon in 1844 in China. As a deacon, he decided to come into Korea alone through Uiju and he arrived in Seoul on January 15th, 1845. For safety reasons, he met only a few leading catechists. He was sick for about a month and when he recovered he decided to lead the French missionaries by sea, and left Chemulpo for Shanghai in a small wooden boat.

Weathering severe storms he safely reached Shanghai where he was ordained a priest by bishop Ferreol on August 17th, 1845, thus becoming the first Korean priest in the sixty-year history of the Catholic Church in Korea. At the end of August, he returned to Korea by boat with Bishop Ferreol and Father Daveluy. They arrived at Cheju Island first, having been driven there by severe storms. They reached Kanggyong in Chungchong Province in October of the same year.

4. His Missionary Activity and Martyrdom

Father Kim Tae-gon spent some time helping Bishop Ferreol and went to his hometown where he moved around the area, mostly at night, teaching and instructing the various Catholic communities. At the beginning of 1846, the bishop summoned him to Seoul. On the orders of the bishop Father Kim Tae-gon tried to contact Chinese fishermen on Yonp'yong Island in order to have them lead Father Ch'ae Yang-up Thomas and the French missionaries waiting in China into the country. But he was arrested on the island on June 5th, 1846 and was sent to the central prison in Seoul. The King and some of his ministers did not want to execute him because of his great personality and his immense knowledge of western studies and foreign languages. However he was sentenced to be beheaded on Sept 15th 1846 as a ringleader of a heretical school and as a betrayer of his country.

In prison Father Kim Tae-gon Andrew wrote a last letter to his faithful. The following are a few excerpts from that latter.

"Dear brethren!... Meditate on the fact that from eternity God created all things in heaven and earth and let men, whom He made in His own image, be in charge of the world.

"There are many miserable and sad things in the world. If we were born once in this difficult and miserable world and didn't know the Master, who had created us, our lives wouldn't be worth living but would be useless. ... My friends! Keep in mind that Our Lord Jesus has come to this world, suffered countless torments, and founded and fostered His Church through pain and suffering. Since the Catholic Church was introduced into Korea 50 or 60 years ago, our people have suffered many severe persecutions and many Catholics, including myself, have been put in prison. How agonizing it is for us to suffer as one body and how humanly sad it is for us to part! However as the Holy Bible says that Our Lord even takes care of the hair on our heads, aren? these persecutions according to His providence? ... In this difficult time, to be victorious, we must be steadfast using all of our strength and capabilities like brave soldiers fully armed in the battlefield. After we die, please, take care of the bereaved families. ... We will soon go out to the battlefield. Be steadfast, and let us meet in Heaven. ... God will soon send you a much better pastor than I. So do not grieve but practice greater charity and serve the Lord so that we may meet again in God's eternal mansion". Father Kim Tae-gon Andrew.

The death sentence was carried out the next day, Sept. 16th in Saenamt'o by the Han River in Seoul where three French missionaries had been previously martyred. He was 26 years old when he was martyred. Just before his death, he made a farewell sermon saying "My eternal life is beginning now," and he calmly and courageously received from God the glorious crown of martyrdom. The feast of Saint Kim Tae-gon Andrew is July 5th.