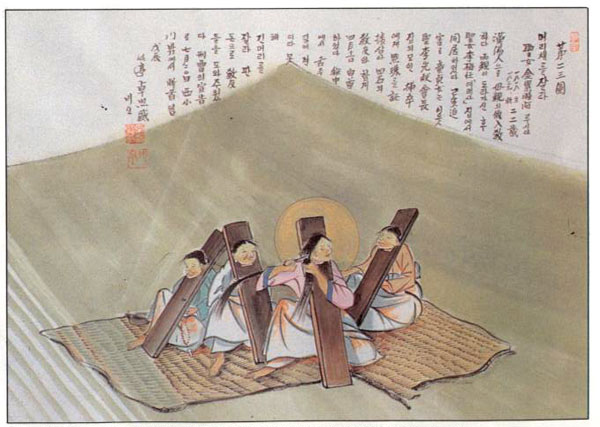 Lucy Kim was a charming young woman with talent, courage and gracefulness. When her parents died, she had to sell all her property to pay for their funeral expenses. After that she lived with a Catholic family, and she made a vow of virginity.

When the persecution broke out, Lucy and three other pious women decided to give themselves up to the government authorities to profess their faith. Lucy was the youngest but was the leader of the group. Lucy did not lose her composure during the interrogations and tortures.

"Can you, such a beautiful woman, believe the Catholic religion?"

"Yes, I truly believe the religion."

"Deny your God, and you will save your life."

"My God is the Father of all creatures. How can I deny my King and my Father? I cannot do that even if I have to die ten thousand times."

"Why are you not married?"

"I am still only about 20 years old. It is not strange that a girl of my age is not yet married. It is not proper for a young woman to talk about her own marriage."

"Are you not afraid to die?"

"Yes, I am afraid to die. But I would rather die than deny my Lord."

"Where is the soul you are talking about?"

"It is in a human body. It is spiritual and invisible."

The police chief tried many kinds of persuasion and torture for a long period of time, but he could not make her weaken. On the contrary, he was embarrassed. The executioners, who saw her composure, thought that she might have been possessed by a ghost.

Lucy and other women had to suffer hunger, thrist and other hardships in prison for several weeks even after they were sentenced to death. Lucy had beautiful hair. She had it cut and sold it. With the money she bought some food that she shared with her fellow inmates. Lucy wrote a letter to one of her friends, in which she said: "I thank God for being sentenced to death after severe tortures and pains. I don't know when the Lord will call me. Please pray for us, and follow us to Heaven. We are waiting to be called by the Lord."

Lucy was beheaded outside the Small West Gate with seven other Catholics on July 20, 1839. She was 22 years old when her heavenly spouse took her to Heaven.