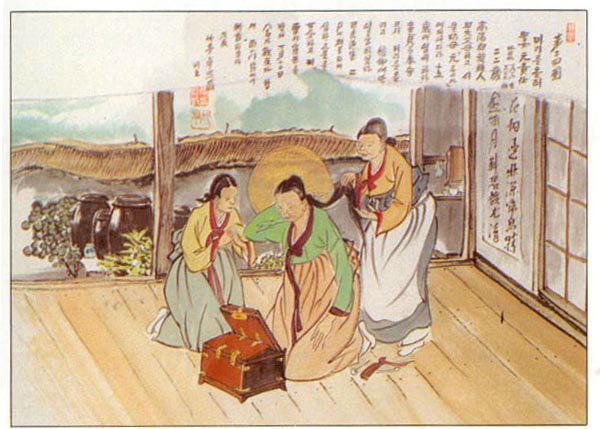 Won Kwi-im Maria was born in 1819 in Yongmori, Kyuanggun. She lost her mother when she was a child, and followed her father, who wandered around begging for food. When she was nine years old, one of her relatives, Won Lucia, who was a very devout Catholic, took her and taught her prayers and the catechism. She also taught Maria embroidery for her lifelihood. Maria was very intelligent, genial and pious. Her aunt was proud of Maria's devotion and faithfulness. Maria was baptized at the age of 15. Soon after that she received an offer of marriage. But she refused to be married because she wanted to offer herself to God. The next year she put her hair up in a style which indicated that she was a married woman.

Maria was accused of being a Catholic by a neighbor and was arrested. She looked a little discouraged when she first was put in prison. But she thought that everything was according to God's Will, and regained her usual peacefulness.

Mary was interrogated by the police chief.

"Are you a Catholic?"

"Deny God, and you will be saved."

Maria's legs were twisted and she was beaten with a cudgel. Many of her bones were dislocated, but her faith was not shaken.

According to the government document Sungjongwon Diary, Maria and seven other Catholics were beheaded outside the Small West Gate on July 20th, 1839. Maria was 22 years old, when she was crowned with martyrdom.