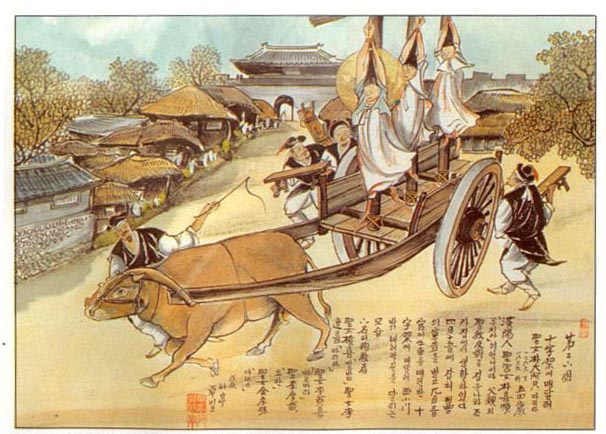 Pak Hui-sun Lucia and Park K'un-agi Maria were sisters who were born into a wealthy home in Hanyang. The younger sister, Pak Hui-sun Lucia, was regarded as a beauty, and at an early age she was called to be a lady-in-waiting to the queen in the royal palace, She was clever and capable and so she was rapidly promoted. She was highly literate in both Korean and Chinese. On the other hand her beauty was the source of a problem. At the age of fifteen, the seventeen year old king noticed her and was attracted by her beauty, making every effort to seduce her.

Palace women would normally have regarded this as an honor and most of them went to great lengths to attract the king's attention. But Pak Hiu-sun Lucia was conscious of the queen's trust and with great courage avoided falling into temptation. A rumor about the situation swept through the palace. Later, when Bishop Imbert heard of it, he remarked, "This is an act of bravery and uprightness, the like of which has never been seen in Korea before."

Pak Hui-sun Lucia was thirty before she heard of the Catholic Church. She was becoming dissatisfied with life in the palace and was searching for greater meaning in life when the Catholic Church became known and was as a great light to her. She wanted to study the doctrine more deeply in order to better understand and believe it. However, the palace, with its luxury and superstition, was no place for the practice of truth. At the time it was customary for palace women to live permanently in the palace, leaving only for very serious reasons, so it was hard for her to escape. However she was determined to spend the rest of her life living according to the teachings of the Church, and, feigning illness, she finally obtained permission to leave.

Her father was adamantly opposed to the Church and refused to let her stay at home so she was forced to live with a nephew. There she rejected all pomp and luxury and adopted a simple lifestyle. Such was her example that her nephew and his family were also attracted to the Church and were baptized.

At about this time her older sister, Pak Maria, also came to live in the same house, The background to her conversion is not known but it was undoubtedly due to the influence of her younger sister.

When the persecution broke out they tried to live quietly together but on April 15, 1839, even as they were trying to draw up plan to avoid the wrath of the authorities, the police descended on their house. Pak Hui-sun Lucia went out to meet them and invited them in for wine and food. To hersurprised family and other Catholics she said, "Nothing happens without God's permission. Since this is God's will, let us accept it willingly."

Pak Hui-sun Lucia, her sister and the other Catholics went off to prison in good spirits. They understood what the future held for them but, strangely, they were not afraid.

News that one of the palace women had been arrested spread fast. A decree came down from the palace, "If there is evidence against any previous palace woman, or any of the present palace women, they are to be arrested after the palace has been notified." Because she had been a palace woman Pak Hiu-sun Lucia was tortured mercilessly.

The police commissioner shouted at her, "Palace women are better educated than other women, how could you believe this despicable false religion?" "We do not believe this a false religion. God created everything in heaven and on earth and gave life to people so it is right to give praise and worship to God. It is an obligation on everyone to adore God," Pak Hiu-sun Lucia replied.

"Give up the Catholic church and report the names of other believers," the commissioner demanded. "God is my creator and Father. Whatever happens I cannot abandon him. Also, he has forbidden us to harm others, so I cannot name other believers."

The commissioner realized that he was not going to succeed with Pak Hui-sun Lucia so he turned her and her sister over to the judges. In the court prison she was tortured three more times, with thirty strokes of the cane each time. Her flesh was lacerated, the blood flowed, the bone of her leg was exposed and finally the other leg broke, Pak Hui-sun Lucia wiped her wounds with her hair saying, "Now I understand a little the pain of our Lord Jesus and Holy Mother Mary." She refused to let her pain show outwardly. No matter how severe her wounds, they completely healed within a few days to the amazement of everyone. The guards and judges attributed it to magic. Realizing that there was no hope of persuading the prisoners to recant, they reported.

"Pak Hui-sun Lucia and her companions persist day and night in their erroneous way. Their deeds are wicked and insincere. Their speech and their silence is all superstition and magic. In speech and in sign language they do nothing but curse. They refuse to repent and therefore are worthy of death."

In prison Pak Hui-sun Lucia, an active apostle of the Lord, taught the prisoners, comforted the sorrowful and helped the Catholics amidst their worries and doubts.

Lucia prepared for martyrdom. While life in prison was extremely hard she was anxious to go quickly to the Lord's side. One day she called the torturer and said to him. "I have a request to make. When you cut off my head do not lose your nerve. Do it with one stroke of the sword."

Pak K'un-agi Maria, like her sister, suffered greatly and also received the death sentence. However the law forbade two family members being executed on the same day so she and her sister had to be parted. As she left the prison for execution on May 24, 1839, Pak Hui-sun Lucia said to the other prisoners, "Let us walk the road of martyrdom together to obtain the glory of heaven." She prayed all the way to the execution ground and without losing her composure she received the executioner's blow and went to her Lord's side. She was thirty-nine years of age. Pak K'un-agi Maria waited another four months until September 3 when she also, at the age of fifty-four, let her blood flow for her Lord.

Both Lucia and Maria were canonized on May 6, 1984 at Yoido, Seoul, by Pope John Paul II.