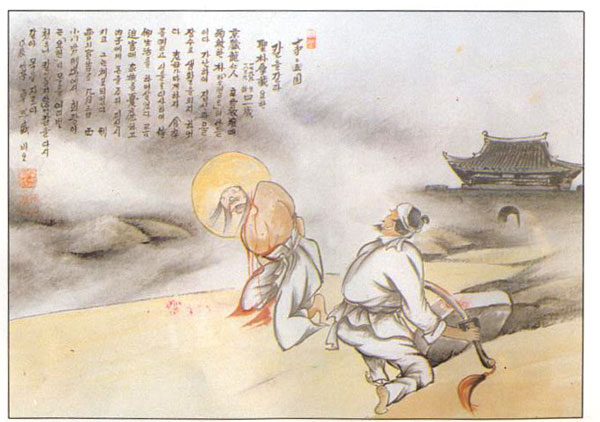 John Pak Hu-jae was a son of the martyr Laurence Pak. John was born in Youngin in 1798 or 1799. Later he came up to Seoul with his family, and made his living by making straw shoes.

His wife testified about his outstanding virtues. John was very faithful in practicing his religion and was a very hard working man. He used to say: "I must die as a martyr in order to save my soul." As a mortification for love of God, he used to hit his shins with a club used for making straw shoes. John used to tell his wife to endure any pains for the sake of salvation. He used to say: "An old saint saw a worm crawling out of his wound, and put it back to the wound, saying 'your food is here.' We must suffer our pains." In March of 1839, when the persecution broke out, he was not frightened. There was no money at home. John sold a large earthenware pot and divided the money into two, keeping one half for himself and giving the other half to his wife for emergency use. He told his wife to spend the night at the home of his aunt. Next day she learned that her husband had been arrested.

He was interrogated by the judge.

"Are your parents still living?"

"My mother passed away a few years ago. My father was beheaded for his faith in 1801. There are no other relatives."

"Do you know that you are violating the king's law?"

"God is my Creator. I owe greater loyalty to God than to the king."

"Deny your faith, if you want to live."

"My religion is more important than my life."

John was beaten with a cudgel 40 times. His flesh was torn off and blood spurted out. The noise of the cudgel crushing his bones frightened others in prison. But John was steadfast in his faith.

John was finally beheaded outside the Small West Gate on September 3, 1839, with five other Catholics. He was 41 years old when he was beheaded.