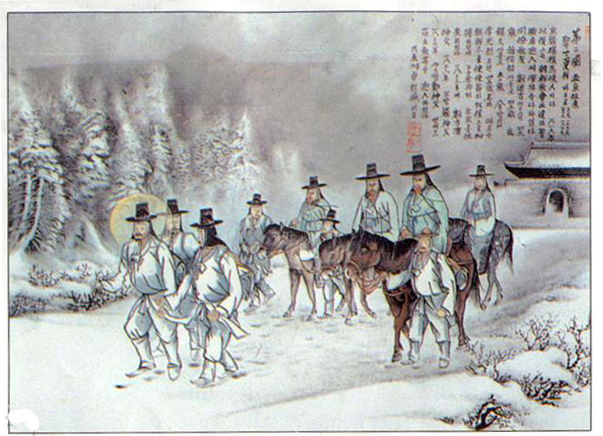 Chong Ha-sang Paul was born in 1795 in Mahyon, Yanggun-gun in Kyonggi Province, near Seoul. He came from a traditional noble family belonging to Namin. His father, Chong Yak-jong Augustine, was martyred on April 8th, 1801, and his mother, Yu So-sa Cecilia, was martyred on November 23rd, 1839. His sister, Chong Chong-hye Elizabeth, was martyred in the same year. His elder brother, Chong Ch'ol-sang Charles, was martyred in 1801 with his father. This was a family of martyrs. Chong Yak-yong, one of the greatest scholars of Korea who is also known by the pen name 'Ta-san', and Chong Yak-jon are his uncles.

After his father, who had written a catechism, "Important of Doctrines of Catholicism", was martyred in 1801, the whole family suffered much. Paul was just seven years old at that time. All their properties were confiscated, and the family wandered about in extreme poverty. But due to his devout mother, Yu So-sa Cecilia, Paul kept his faith.

At the age of 20, he left his mother and sister at home and went to Seoul. He tried to rebuild the Catholic Church which was struggling without a priest. He decided to try to bring missionaries into the country to revitalize the Church.

Paul went to Cho Tong-som Justin, a great scholar, who had gone to Hamgyong Province for Chinese studies. Although Paul was a man of the nobility, he humbled himself to become the servant of an interpreter, who used to frequent Beijing.

In 1816, he went to Beijing and asked the bishop of Beijing to send missionaries to Korea. In Beijing, he was baptized and received the Holy Communion.

On his visit to Beijing in 1817, Paul obtained a promise from the bishop of Beijing to send a missionary to Korea. But the missionary died before he could enter Korea. In the following year Paul sought assistance for his efforts from the newly baptized Yu Chin-gil, Cho Shin-ch'ol and also Chong Yak-yong, an uncle who was in exile in Kang-jin. So, his efforts to bring missionaries into Korea continued.

Paul and his group sent a letter to the Pope in Rome appealing to him to send missionaries to Korea. The letter written in 1825, following Kwon John's letter of 1811, moved Rome toward a decision. In 1792 Bishop de Gouvea of Beijing had first reported to Pope Pius VI the fact of the existence of the Church in Korea. The Holy See was astounded to learn that the Church had appeared there, not through the efforts of foreign missionaries but through the efforts of its own scholars.

Paul and his companions kept writing to the bishop of Beijing for missionaries. Their unceasing voices were finally heard in Rome. InSeptember 1827, Cardinal Capellari of the Congregation for the Propagation of the Faith wrote to Father Langlois, rector of the Paris Foreign Missions Society seminary, asking whether he could speedily commit the society to mission in Korea.

In December, 1830, Cardinal Capellari, who had initiated the Paris Foreign Missions Society's move to Korea, became the new Pope, Gregory XVI. On September 9th, 1831, he issued two decrees: One decree established Korea as a vicariate separate from Beijing and the second appointed Bishop Bruguiere as the first bishop of Korea. At the same time the Paris Foreign Missions Society was asked to be in charge of the Church in Korea.

It was over forty years since native scholars had established the Church and thirty-three years since the Chinese priest, Father Chu Mun-mo, had entered Korea. Father Chu had secretly ministered to the Catholics for five years until he was captured and martyred. Since then the Church in Korea had been a sheepfold without a shepherd, yearning for priests to be sent to them.

Paul traveled to Beijing nine times and three times to the Korean-Manchurian border. Yu Chin-gil Augustine went to Beijing many times. The revitalization of the Church in Korea was due greatly to their unselfish dedicated efforts. Whenever missionaries came into Korea, Paul met them at the border in Uiju. He introduced Bishop Laurent Imbert into Korea, had him stay in his home and served him during his ministry.

Bishop Imbert highly esteemed Paul? faithfulness, and decided to make him a priest. He taught him Latin and theology. However, a new persecution erupted, and the bishop had to escape to Suwon.

While Paul was waiting for martyrdom, he wrote Sangje-sangso (A Letter to the Prime Minister) to be submitted to government officials in case of his arrest because of his defense of the Catholic faith. This is the first book of apologetics in Korea. Even the enemies of the Church were impressed by its eloquent contents.

Paul was finally arrested in 1839 with his mother and sister. He and Yu Chin-gil were considered the leaders of the Church who introduced foreign missionaries into Korea. Therefore the tortures they received were far more severe than others. Paul endured all those severe tortures, and finally was beheaded outside the Small West Gate of Seoul on September 22nd. 1839, at the age of 45.

Chong Ha-sang Paul is considered a leading figure in the Church. He rehabilitated the Church, which was in danger of annihilation because of severe persecutions, and made the establishment of the Vicariate Apostolic of Korea possible.