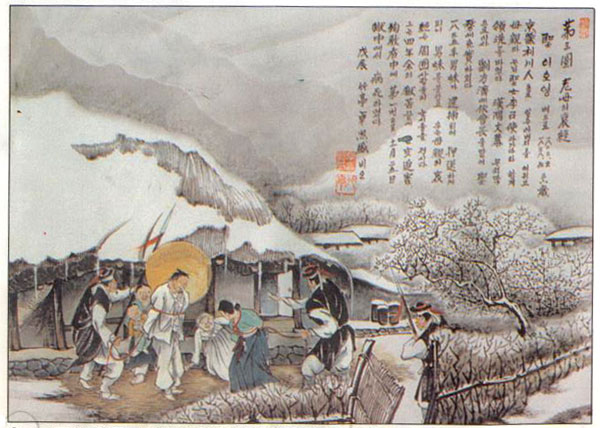 Peter was born in Inch'on in 1803 and moved to Seoul after his father's death. There Peter's family lived in extreme poverty, but in peace. Peter began visiting Yi Kyong-on Paul and learned from him. Yi kyong-on was a fifteenth generation descendent of T'ae-jong, the third king of the Choson dynasty, and the youngest brother of Yi Kyong-do Charles and Yi Lugalda, who were martyred in 1801. Yi Kyong-on Paul continued to teach Yi Ho-yong until he himself was captured in 1827. Taken to Chonju Paul died in prison after undergoing the most terrible torture. His martyrdom served to teach Yi Ho-yong Peter the real meaning of faith.

In January 1834, Father Yu Pang-che Pacificus from China entered Korea, the first priest in thirty-three years. The joy of the Catholics was great and words could not describe their happiness. For the first time they received confession and communion. Father Yu who saw in Yi Ho-yong Peter qualities of devotion, gentleness and straightforwardness, made him a catechist. One day Peter had a dream of passing the national examination. In the dream he heard beautiful music and someone telling him that the king's aid loved him. Peter thought that this dream was a hint of his martyrdom. In fact, one day in February of 1835, when he returned home from work, a group of captors were waiting and arrested him. Peter spent four years in prison, suffering all kinds of torture and hardships. He himself described in a letter some of the questions he was asked and his answers.

"Why do you believe in the Catholic religion which is against honoring parents and prohibited by the government?"

"It is not true. Anyone who believes the Catholic faith has torespect the king and his parents and love others. How can you say that such a wonderful religion is against honoring parents?"

"You don't offer sacrifices to your deceased parents. Therefore, you are worse than an animal, and deserve to die. Will you renounce your religion or die?"

"It is foolish to think that a dead person can eat sacrificial food. The one, who dies for a king, is not a traitor. God is the King of kings who created heaven and earth, men, angels and all creatures in the universe ... How can you condemn the one, who would rather die than deny the Father of all mankind?"

The judge beat him until his leg bone was twisted out of place and demanded that he deny God. But Peter said "I can never deny God." The judge had his men beat him on his waist and legs, and said to him: "If you scream, I will take it as a sign of renouncing your religion." Peter didn't make a sound.

In the "Diary of the Persecution of 1839" it says. "Like a lamb being led to the slaughter he did not open his mouth, even under the pain of terrible beating."

Peter said that he would gladly die of sickness in prison if it is God's Will. During four long years of imprisonment, he continued his prayers and fasting, and showed an example of goodness and simplicity that even the prison guards and his fellow prisoners admired him. An old prisoner who shared his cell was so impressed by him that he repented his past and accepted Peter's instruction for baptism. Although he and his sister Yi Agatha were in different cells the guards sometimes arranged for them to meet and on those occasions they encouraged one another and promised to die as martyrs on the same day. But Peter slowly succumbed to weakness and disease and died first.

Father Antoine Daveluy, who arrived in Korea in 1845 and later became the fifth bishop in Korea, and Bishop Felix Ridel, who was imprisoned in Korea in 1877, both wrote about prison life.

The Catholics were kept so many to a cell that they could not lie down. They all agreed that prison life was worse than the torture. Because of the stench from the blood, pus and rotting straw matting they quickly fell ill, and some died within two or three days. However, worst of all were hunger and thirst. Not a few, who bravely endured the torture, later surrendered because of hunger. With only two handfuls of rice a day, they sometimes tore up thestraw matting and chewed it, or ate the lice crawling in the cell. (Bishop Daveluy).

I took one look at those suffering from hunger and staggered back. They looked more like skeletons moving about than people. Their appearance was changed by suffering, hunger, itching and running sores, they were terrible to behold. (Bishop Ridel)

"I had wanted to die by the sword but I want nothing that is not God's will, Peter said; he died shortly afterwards. It was November 2nd, 1838 and he was only thirty-six years of age. Thus he became the first martyr of the 103 Korean saints. Yi Ho-yong Peter was beatified on July 5, 1925 and canonized on May 6, 1984 at Yoido, Seoul, by Pope John Paul II.