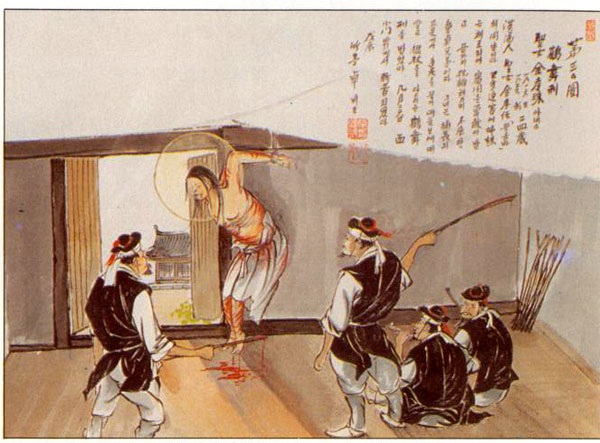 Kim Hyo-im Columba was born in 1814 and her sister Hyo-ju Agnes two years later to a pagan family in Bamseom, which means chestnut island, on the banks of the Han River. Originally their family had not been Catholic but their mother had early on taken an interest in the faith and gradually came closer to it but their father was a non-believer. In fact, their father did not even want to hear the Church mentioned in his house and strictly forbade it.

After their father died, their mother became a devout Catholic with her six children: Anthony, Benedicta, Hyo-im Columba, Hyo-ju Agnes, Francis and Clara. Shortly after their baptism Hyo-im Columba and Hyo-ju Agnes, along with their younger sister Clara, promised to offer their lives to God as virgins. Their mother thought they should get married but they did not change their mind and braided their hair up in chignons to give the impression that they were married women. They went to live with their older brother, Anthony, who was living in Yongmori, near Seoul. They devoted themselves to their spiritual life by praying, fasting twice a week, reading religious books, saying the Rosary and giving alms to people in need. Their family was well-off but they showed no interest in earthly wealth. By temperament they were gentle and affectionate and this was reflected in their lives.

All the Catholics around praised their charity and good example, and showed them great respect. Their mother died in Yongmori. Because she had been such a faithful Catholic Father Chastan had come specially to confer to her the Last Rites. From then on they never left Yongmori.

In 1839 the persecution began to spread and Catholics were arrested everywhere. Yet the three sisters were not afraid and prayed daily for those who were suffering in prison. On May 3, a man named Kim Sa-mun who lived in the same village reported Anthony to the magistrate as a rich man who was a believer, and described how his house could be found. The police who had been frantically searching for Catholics in the area headed to Yongmori without delay. Anthony happened to be away at the time doing business as well as practicing his archery. Upon hearing the news of the police's arrival Anthony's wife Kim Lucia escaped with Banedicta and Clara, and Columba climbed over the wall into the neighboring house and hid in a pile of wood. Agnes alone was not able to flee. She was sitting in her room when the police invaded the house. The excited invaders took Agnes prisoner and after searching the house next door found Columba too and brought her back to her home. Then, Columba who saw the rude invaders mishandling her younger sister Agnes got angry at them and protested in a dignified manner: "If you want to arrest us we will follow you quietly. But why do you molest one considered a criminal of the country?"

The police put the two sisters in a room and spent the night in the house having a feast on the dogs and chickens of the household. In the morning they bound the sisters with a red rope and after presenting them to the village leader took them off to Seoul.

As soon as they arrived at the Justice Ministry the interrogation began. The judge asked Columba.

"It is said you believe in the Catholic Church. Is this a fact?"

"Yes, it is. I worship and respect God."

"Why do you believe a teaching that is forbidden in our country? Why do you the Catholics refuse to offer the ancestral rites?"

"The ancestral rites have no meaning. In this world it may be right for children to prepare food for parents who are in jail and ask them to come out and eat it but if the parents cannot come out and eat the food prepared for them of what use is it?" The judge continued, "That is what you say. However, not offering the rites to ancestors is an act which destroys human relationships. Tell us that you give up your faith and reveal to us where you have hidden your books and where the other Catholics are. Reveal us the whereabouts of your brother?" They answered. "Even though we were to die ten thousand times we cannot renounce our faith in God. We do not know where our brother is either."

The two sisters also explained why they could not betray the other Catholics and give up their religious books. Preparations were then made to torture them. It was the normal practice to torture Catholics who had been arrested and were being interrogated. The police first beat them all over their bodies, then used a cudgel with spikes on it on their shoulders, arms and the joints of their knees. Yet the expression on their faces did not change. The commander got angry and shouted, "Use more strength. Hit them harder!"

So, they underwent the pain of the 'jurae' five times. Between each session the police enticed them with promises and hopes if they would change their minds. However, the two sisters did not waver. They shook their heads and remained silent. The bones in their legs bent under the torture of the 'jurae'. During it all the sisters seemed to be already enjoying the heavenly peace. They never uttered a sound. Often those who were to be martyrs called on "Jesus, Mary" while being tortured, but these two sisters said nothing.

They prayed in silence as though exchanging words directly with Jesus and Mary. The prison guards could not hide their amazement at their silent persistence. This caused them to be more angry and malicious. They thought the two women must be possessed by some devilish power. They tore off the sisters' clothes and wrote the characters for 'jumun' (an incantation or charm) on their backs. Then they burned the lines of the characters into their backs up to thirteen times with a red hot skewer. But it was as if the two women did not know what was happening. Even as the flesh on their backs burned their calm expression did not change.

The magistrate began his interrogation. First he asked them about their celibate life. "You are now of adult age, why are you not married?"

Kim Hyo-im Columba replied: "We wish to keep our minds and bodies completely pure so that we can serve God faithfully and give Him even greater joy." Agnes gave the same response. The magistrate tried to use it against them. He thought that if they experienced insults and indignities disgraceful to them as virgins they would give in and renounce their faith.

He gave them over to some of the rougher guards with instructions to humiliate them further by making them dance the 'crane dance'. This punishment consisted of stripping the prisoner tying his two hands behind his back, placing ropes between his arms and suspending him in a public place. Then four guards in turn whipped the prisoner with canes made from bamboo. After a few minutes foam would come out of the prisoner's mouth, his tongue would protrude and the color of his face would become dark blue. If he was not quickly lowered to the ground he would soon die. For women it was a particularly brutal torture.

The two sisters were dragged to a secluded cell, stripped of their clothes and tortured in that way. The coarse guards lost any sense of mercy and cut them down only when they were on the brink of death to give them a rest so that they could raise them up again and continue the cruelty. Despite the pain and insults Hyo-im Columba and Hyo-ju Agnes never lost their courage and never uttered a sound.

When the magistrate saw that even the 'crane dance' was not enough to make them change their minds he thought of an even more evil scheme. He decided to destroy the young women's virginity. If the virginity which they offered to God was soiled they might become discouraged and renounce their faith. He had their clothes removed and put them in among the male criminals. However God protected them there and for two days they survived unharmed among men who were accustomed to every sort of evil.

It was as if the Spirit covered them with His power. The men in the cell seemed to recognize some mysterious power in them and left them untouched. Eventually the guards returned their clothes to them and put them back in the cell with the other women. They were sent to the Ministry of Justice. The chief judge interrogated them.

"Is there no other way of practicing virtue and doing good besides entering the Catholic Church?"

"Don't you think Confucius and Mencius are sages then?"

"They are sages but only of this world."

Towards the end Kim Hyo-im Columba said, "A chief judge is said to be a father to the people. Therefore I would like to tell you what is on my mind. Please give me permission."

The chief allowed her to speak. Kim Hyo-im Columba then related what had happened to her sister and herself while they were in jail.

"Whether she is the daughter of a noble or a commoner, the chastity of a young woman has the right to be respected. If you want to kill me according to the law of the country, I will willingly accept the punishment. However I do not think it is right to have to suffer insults that are not part of the law and I object to them."

The chief judge was astonished at what she had to say and stated, "The chastity of this woman is as precious as a white jade. What kind of savages insulted her?" He ordered that the incident be investigated and the report sent to the Ministry of Justice.

The two sisters were brought from the court to be beaten and to receive further interrogation. Their inquisitors demanded them to reveal the whereabouts of other Catholics and their brother Anthony in particular. They refused to answer and by this chose the road of martyrdom.

On September 3, 1839, Kim Hyo-ju Agnes was beheaded outside the Small West Gate of Seoul with five other Catholics. Agnes was 24 years old.

On September 26, Kim Hyo-im Columba was beheaded at the same place with eight other Catholics. Columba was 26 years old.

The two sisters were canonized on May 6, 1984 at Yoido, Seoul, by Pope John Paul II.