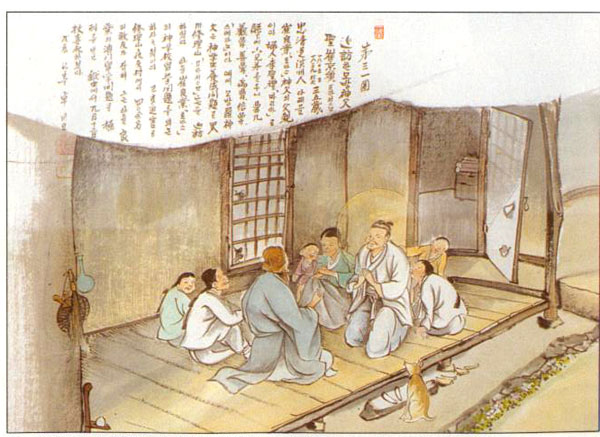 Choe Kyong-hwan Francis was of the Kyongju Choe clan, born in 1805 to a prosperous family in Taraekkol, Hongjugun, Ch'ungch'ong Province. His grandfather, Choe Han-il, was the first member of the family to be baptized in 1787 after he had received instructions from the renowned Yi Chon-ch'ang.

After being without a priest for a long time, many of the Catholics in the area were Catholic in name only. They regularly engaged in superstitious acts and false worship, so there were many obstacles to obeying the Commandments and practicing their faith. Francis could not tolerate this situation, so he left home one day and settled in the village on Mount Suri near Kwach'on in Kyonggi Province.

At this new-found site Francis was able to live a life of faith. Clearing the hillside of trees, he planted tobacco and helped newly arriving Catholics to build homes for themselves. With all their heart and soul they obeyed the Commandments and at night they studied the doctrine, meditated and prayed.

At first only three or four families lived in the village but slowly this number grew into over twenty. At night Francis would gather them all in his house and teach doctrine. His explanation of Church's teaching was earnest, concise and persuasive. His speech ability spread and Catholics came from far and wide to hear him.

He was not all that well educated but frequent meditation and studying of spiritual books gave rise to a burning love of God in his heart and he had an amazing knowledge of the Church's profound truth. Whether working or at home, in the fields or walking along the road, his heart was always in union with God. He never spoke of any other matter except what concerned love of God and devotion.

In 1839, he was appointed catechist. The persecution of 1839 was beginning and around Hanyang many Catholics were being apprehended and subjected to hunger and suffering. Francis collected money and traveled about using it to help the imprisoned Catholics and poor unbelievers as well. He also helped in burying the bodies of the martyrs.

Returning home, he instructed his family to prepare themselves for martyrdom. He collected all their religious artifacts and buried them in the ground, except for the catechetical books. He said, "We hide our religious articles so that they will not be profaned but books are not blessed. A soldier going to war needs his battle instructions. At a time like this we must study all the books more earnestly."

In 1836, when Choe Kyong-hwan Francis was thirty-one, Father Maubant, a missionary priest from the Paris Foreign Mission Society arrived in Korea. Knowing the difficulty that foreign priests had in getting into and staying in Korea, Father Maubant decided to send young Koreans overseas to study for the priesthood.

Choe Kyong-hwan Francis' oldest son, Yang-up, was reported to him as being exceptionally intelligent, so Father Maubant decided to call on his parents. He sat down opposite the husband and wife and carefully talked to them.

"Francis and Maria, I have come to consult you about a very important matter today. I have heard that your son, Thomas, is very intelligent. I would like to send him to Macao to study for the priesthood. Will you give your consent?"

"Thank you, Father. This is not our will but the call of God, a vocation. We had no idea that such a blessing and happiness would come to our house. Thank you again." The couple willingly gave their consent.

At that time the influence of Confucianism was such that Koreans did not readily send their sons to live even with their older or younger brothers. However, this couple realized that sending their son off to a far away foreign land was the will of God.

On the night of July 31, 1839, police came from Hanyang to the village at Mount Suri where they surrounded Francis' house and with shouts and insults broke down the gate. However, Francis greeted them like welcomed guests.

"Welcome to our house. Why has it taken you so long? We have been expecting you for a long time. We are all ready for you. Come in and rest until daybreak. Let us leave together at dawn."

And he provided them with rice wine. The police were amazed at this attitude and said to one another,

"These people are indeed true believers. There is no danger of them escaping, so let us rest before leaving."

While they rested Francis toured the village and told the residents,

"This persecution is countrywide and it seems to be the government's intention to root out the Church totally. At dawn let us go with the police, give witness to our faith and seek martyrdom."

The Catholics all agreed to his proposal. To his own children he said,

"Even if you stay here you will not escape death. Rather then starving to death at home it would be better to die in prison in Hanyang. Dying while giving witness in prison is true martyrdom."

At dawn he rose and served breakfast to the police. To one shabby policeman he gave a clean suit of clothes. The village people were rounded up and one by one, asked if they were Catholics. The ones who apostatized were allowed to go free.

Early in the morning Francis and about 40 others, including children, were rounded up and taken to Seoul. One estimate puts the total number at 100. Francis went in front, followed by the men, then the women and children. The police followed behind. Francis told the group of tired Catholics that an angel was measuring their steps with a golden ruler and encouraged them to think of Jesus on the Cross. It was the height of summer and the heat made walking difficult, especially for the women and children. Among those who watched this strange procession there were some who hurled insults at them and others who felt sorry for them.

As they arrived at the Great South Gate, people shouted at them,

"You wicked people. Die if you want to, but, why to make these innocent children die with you?" It was evening before they arrived at the prison.

The next day the interrogation started. The police commissioner said,

"If you want to believe, do it alone. Do not deceive these other people."

To this warning, Francis replied, "Whoever does not believe in the Catholic Church goes to hell." Encouraging them to believe in the Catholic Church was out of love, to save their souls from hell. The angry judge ordered that he be tortured until he recanted and apostatized. But he bravely withstood the torture even though his whole body was bleeding and covered with wounds.

Francis was bleeding heavily and his bones were exposed, but he was steadfast. Next the other Catholics were called and questioned. But they couldn't endure the harsh tortures and finally they all denied their religion except three persons; Francis, his wife, and one of his women relatives, Yi Emerentia. Catechist Choe Francis was sad to see his fellow Catholics go away and his Mount Suri community being reduced to only three.

When the judges discovered that one of his sons, Choe Yang-up Thomas, had gone to Macao to study theology, they increased pressure on him to make him deny God. They beat him so severely that the bones of his arms and legs were all dislocated. Francis said to them: "You can make me stop eating, but you can never make me deny God." He went on "How dare you demand that I betray the Church. Infidelity among ordinary people is regarded as wrong. How much more so is infidelity to God!"

According to witnesses, during the two months Francis was in prison, there was hardly a day that he was not subjected to torture until his whole body became one great wound.

It is told that he was whipped 340 times and beaten with a club on his shins 110 times. Despite all, he never stopped praying or preaching the Gospel to people around him. One day, to aggravate his suffering, the police chief tied a fierce robber with him. The robber ridiculed him and kicked his wounds. But Francis endured everything without a word until even the robber was won over and exclaimed, "If anyone is going to believe in the Catholic Church, they should believe like him."

If his patience and courage had not come from a deep faith in God he could not have withstood such severe torture and hardship. In the midst of this pain, whenever he was asked to explain the doctrine of God, Francis was filled with joy and gladly preached the doctrine to those in prison with him. One day a prison guard put Bishop Imbert's mitre and vestments on Francis, and he bowed reverently, saying that he was bowing to the Cross.

On September 11, Francis was taken out to the court again and beaten with a cudgel 50 times, but it was his last torture.

Back in his cell, knowing that he was dying, he said to his fellow Catholics,

"I had hoped to give witness to the faith by dying under the sword. But it is God's will that I die in prison."

He was thirty-five years old. Although his death was not as dramatic as being beheaded, his spirit still shines as a heroic sign of true faith for all believers.

His wife, unable to overcome her motherly love for her young children, agreed to apostatize but immediately regretted her decision and withdrew it. After great suffering, she was beheaded at Tangkogae on December 29, 1839, at the age of thirty-nine. Francis was canonized on May 6, 1984 at Yoido, Seoul, by Pope John Paul II.

Choe Kyong-hwan Francis' oldest son, Choe Yang-up Thomas(1821-1861), was ordained a priest in Shanghai in 1849 and returned to Korea. He worked in Korea for twelve years, going to isolated country places where no foreign priest could venture. He also gathered much information about the martyrs, translated it into Latin and sent it to Rome. Dallet's History of the Church in Korea, owes indeed much to the work done by Father Choe Yang-up Thomas at that time. Apart from the history of the Church in Korea, Father Choe also wrote much on Korean culture, customs, geography, literature and art, introducing these to a wider Western audience.

He also produced books on Catholic teaching for the use of the Korean believers. The words of one of his poems described his mind:

"Oh yes, my friends, Let us search for our true home."