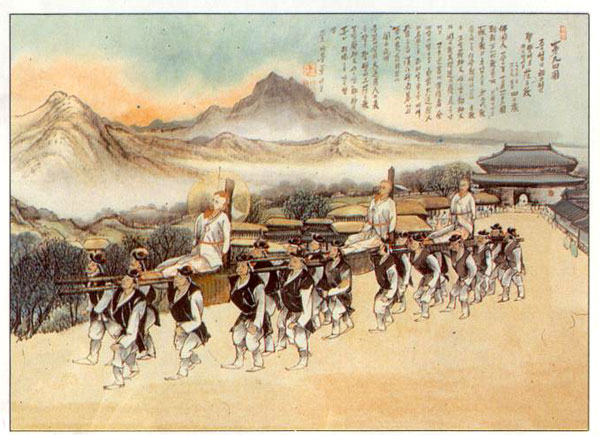 Bishop Imbert was born in France on April 15, 1797. He joined the Paris Foreign Mission Society in 1819, and in the following year he left Paris to go to Szechuan in China. Later he was in charge of the seminary there.

He was named the Vicar Apostolic of Korea at the age of 41. In 1837, he was led by Korean Catholics and successfully crossed the Yalu River after many hardships and difficulties. Thirteen days later his entourage arrived at Seoul. He was the fist bishop to set foot in this country, six years after the establishment of the Vicariate Apostolic of Korea and 52 years after the foundation of the Catholic Church in Korea. One can easily imagine how happy the Catholics of that time were.

He met two French priests, Fathers Maubant and Chastan. They worked very hard in a strange and unfamiliar country. The number of the Catholics was about 6,000 when the first French missionary (Father Maubant) started to work in Korea in 1836. By 1839 the number of Catholics had reached 9,000.

Bishop Imbert tried to escape the persecution, and in 1839 hid himself in Suwon with the help of Son Andrew.

The fact that the French missionaries were in the country had become known publicly to almost everyone, because some informers spread the news.

The simple Catholic, deceived by Kim Yo-sang, led the group of men to Son Andrew's home, where Bishop Imbert had been hiding. He arrived ahead of the police and told the bishop what he heard from Kim Yo-sang. The bishop knew that the Catholic had been deceived. He did not run away but decided to give himself up to the police in order to avoid trouble for his people.

On August 10, 1839, the feast of St. Laurence, his patron saint, Bishop Imbert surrendered himself to the police and was led to the Seoul prison. He was interrogated by a Korean official. The official forced him to renounce God, but he strongly refused to do so. Therefore, Bishop Imbert was finally sentenced to death, and was beheaded at Saenamteo on September 21, 1839. He was 43 years old. His body was buried in Samseongsan Mountain, and later transferred to the grotto of Myongdong Cathedral.