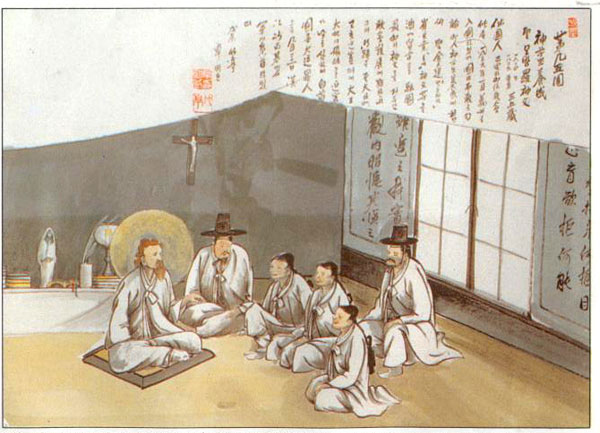 Father Maubant was born in 1803 in Vassy, France. After being ordained a priest, he entered the Paris Foreign Mission Society in 1831. He was sent to China where he volunteered to go to Korea.

He became the first French missionary to enter Korea. In 1836, disguised as a mourner, he crossed the Uiju border through a ditch and safely arrived at Seoul 15 days later .

He always traveled in a mourning costume which covered his whole body. He heard confessions of the Catholics in Chinese writing or through interpreters. He and Fr. Chastan, who came to Korea after him, had to endure the difficult and unfamiliar environment of the country, staying in tiny mud huts and eating poor food. He finally fell seriously ill and received the last rites from Fr. Chastan. His illness was miraculously cured three months later.

Fr. Maubant and Fr. Chastan calculated the number of the Catholics to be about 6,000. The two missionaries established mission stations, mostly in remote places in the mountains, and visited them frequently. In each mission station a catechist was named. In 1837 alone, they baptized 1,237, heard 2,087 confessions, and distributed Holy Communion to 1,950.

Fr. Maubant felt it necessary to have native priests, so at the end of 1836 he selected three young boys - Francis Xavier Choe Pangje, Andrew Kim Taegon, Thomas Choe Yangeop - as seminarians. He taught them Latin, and then sent them to Macao. The young seminarians arrived at Macao after eight months' travel through Manchuria, Mongolia and China. They studied at the Procure of the Paris Foreign Mission Society in Macao.

Fr. Maubant and Fr. Chastan made a final report to the Holy See: Catholics: 10,000; Baptisms: 1,200; Confirmations: 2,500; Confessions: 4,500; Holy Communions: 4,000; Marriages: 150; Extreme Unctions: 60; Catechumens: 600. Then they surrendered themselves to the government officials in Hongju. All three French missionaries were sentenced to death and were beheaded at Saenamteo by the Han River on September 21, 1839. Fr. Maubant was 35 years old. Their bodies were buried in Samsongsan Mountain and later transferred to the grotto of Myongdong Cathedral of Seoul.