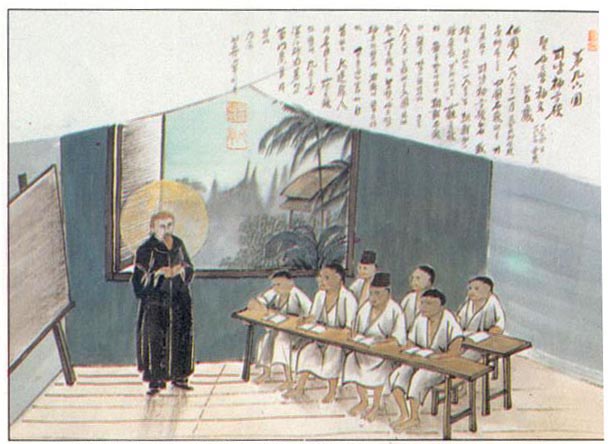 Father Chastan was born in a small village in France on October 7, 1803. His parents were simple farmers. From the time he was a boy, he had a strong desire to go to a remote foreign land to save souls. He entered the seminary, and his desire to save souls became stronger. To those who doubted whether he could bear all the hardships in a foreign land, he used to answer that God would give him courage to bear all the hardships and that a piece of bread and a glass of water would be all he would need in order to survive.

When it was decided that he could enter the seminary of the Paris Foreign Mission Society, he was very happy and sent the following letter to one of his friends. "Rejoice with me! My joy is greater than the joy a man might feel who thought he would be imprisoned for a long time, but then is finally freed. Rejoice with me, therefore, and praise the divine providence with all my friends!"

Jacques Chastan was ordained a priest just before Christmas of 1826 and went home to bid farewell to his parents. They knew their son's desire to go to a mission land, but it was a surprise for them to realize that he had to leave so soon. With tears in their eyes, they begged him not to go. Father Chastan knelt before his mother and asked for her blessing, but she strongly refused to bless him, calling him an ungrateful son.

Father Chastan's heart was breaking with sorrow, but his strong will remained steadfast. He tried to convince his parents that it was God's will for him to go to a mission land to save pagan souls. They would not listen to him. Father Chastan had to leave home without a gentle kiss from his mother. He went away knowing that he would probably never return. It was a really sad moment.

Father Chastan came to Korea, and with Father Maubant, who had been in Korea before him, worked hard to save souls. They visited remote Catholic villages deep in the mountains and converted many people. They baptized thousands, heard their confessions, and said Mass for them.

Following the order of Bishop Imbert, Father Chastan gave himself up with Father Maubant. All three missionaries met in prison. They were beheaded at Saenamteo on September 21, 1839. Their bodies were buried in Samseongsan Mountain and later transferred to the grotto of Myongdong Cathedral. Father Chastan was 35 years old when he was martyred.