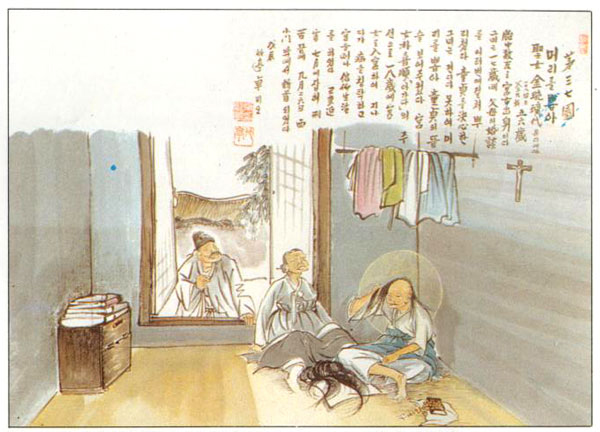 Iulietta Kim was born in the countryside. Her parents were highly praised by Bishop Ferreol as an outstanding couple. The whole family later moved to Seoul. Her parents wanted her to get married, but Iulietta wanted to live as a virgin and refused to be married. In order to prove her resoluteness, she had her hair cut. The parents finally said that they would decide when her hair grew out again.

When the persecution of 1801 broke out, her family returned to their country home. Iulietta quietly escaped and became a servant in the royal court. Since it was difficult for her to practice her religion in the royal court, she came out of there and went to a Catholic home to live. She made some money by weaving and bought a small house for herself. She had a strong will, and people respected her strictness in words and deeds. She did her best in prayers and meditations. People used to say that Iulietta might never have committed a sin. She was always ready to be arrested.

The police chief made the usual demand that she deny God and reveal where the Catholics and the Catholic books were hidden. Of course, Iulietta refused the demand of the police chief, and she was beaten very severely. In the higher court she was severely beaten again on three different occasions. She admirably endured all the tortures and pains.

Iulietta was finally beheaded with eight other Catholics outside the Small West Gate on September 26, 1839. She was 56 years old when she was martyred.