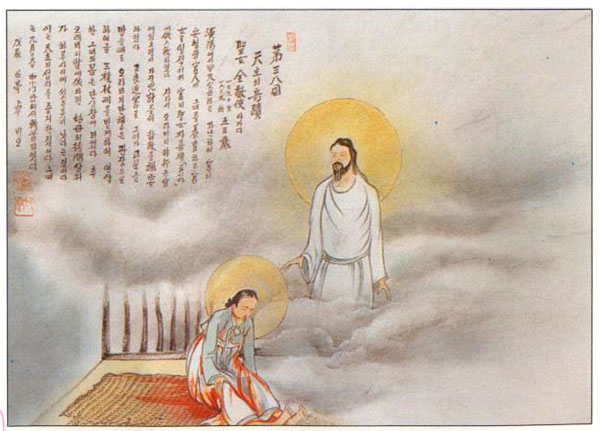 Agatha Chon Kyong-hyob was born in Seoul of pagan parents. After her father died when she was still young, she lived in extreme poverty. A court lady by the name of An Hyong-gwang helped Agatha and lived with her. A few years later Agatha's brother tried to get her married, but the court lady would not let her go. Agatha was also listed as a court lady. She became a Catholic under the influence of Pak Lucy, another one of the court ladies. After Lucy left the court to practice the life of faith more freely, Agatha also pretended to be sick and left the court because she thought the luxurious life of the court might hinder her spiritual life. Since then, Agatha had lived with Lucy, dedicating herself to prayer, devotional reading and virtue. People admired her, and she converted many of them to Catholicism. She did not complain even in extreme poverty and poor health. She was just waiting to be arrested.

When she was arrested, she was more severely tortured because she was a court lady. The police chief interrogated her.

"How can you, as a court lady, believe a heresy?"

"My religion is not a heresy, because I believe in God as the Creator of angels, men and all things."

Since the police chief could not make Agatha deny her religion, he sent her to the higher court where she was interrogated again.

"It is a greater crime for a court lady to believe a heresy. Deny your God and reveal where your Catholic people and the Catholic books are hidden."

"I can't do that even if I have to die ten thousand times."

She was beaten so severely that her flesh was torn apart, her bones were broken and her blood fell profusely to the ground, but she would not surrender. Even non-Catholics admired her courage.

Agatha's brother was a pagan and a high ranking government official. He was afraid to lose the king's favor and tried hard to make Agatha give up her religion. But she would not succumb even to her brother's wishes. Her brother then tried to kill her. He sent a poisoned egg cake to his sister in prison. Being suspicious, Agatha pierced the cake with a hairpin. The hairpin's color changed as soon as it touched the cake, so she did not eat it. Then her brother bribed the highest ranking executioner to beat Agatha to death. But the executioner did not kill her. Agatha's niece, her brother's daughter, said that it was really miraculous that her aunt's wounds were completely healed in a day. Agatha heard that her brother requested that she should stay in prison permanently. She prayed that she might be beheaded for her faith. Her wish was fulfilled.

Agatha was beheaded, as she wanted, outside the Small West Gate on September 26, 1839, with eight other Catholics. She was 53 years old at the time.