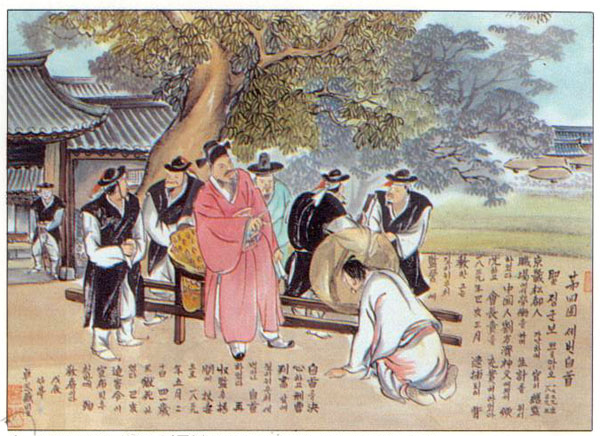 Chong Kuk-bo Protasius was born in Songdo, Kyonggi Province in 1799 to a noble family. At the time of his birth his family was both influential and wealthy. However his grandfather made many mistakes and irregularities which ruined the family. Protasius’ father who wanted to live as a commoner hiding the nobility of his family moved to Seoul and worked in a straw rope factory operated by the government with his son Protasius.

Protasius was a man of a mild and humble disposition. Even in the midst of poverty and hardship he was gentle and kind to everybody.

He was over thirty before he heard of the Catholic Church and although he obtained faith late in life he eagerly studied the teachings and faithfully practiced them. He was baptized few years later.

Father Yu Bang-je, Chinese priest, recognizing Protasius’ faithfulness, entrusted him with a newly bought house. The house was a resting place for Catholics who came up to Seoul from the country to receive the sacraments. Protasius looked after it and cared for the guests.

With his wife he offered himself totally in service for others and both husband and wife were models of Christian living. However, misfortune dogged them continuously. Apart from their extreme poverty, Protasius was not healthy. They had fourteen children but they all died in infancy one by one until none was left. Protasius accepted all these trials as the will of God and bore them without complaint in union with Christ on the Cross. He was always anxious to read religious books and eager to listen to the sermons and teaching of Father Yu Bang-je and the catechists.

When the Kihae persecution broke out in April of 1839 Protasius and his wife were among the first to be arrested and taken to prison. There he was subjected to extreme torture and investigation but he refused to give up his religion.

But when he was sent to the higher court, he was tempted by officials’ soft-talking and promises. In addition his physically weak state aggravated by hard punishment weakened his heart. He finally gave into the temptation and declared that he would renounce his faith. He was immediately released from prison and sent home but the moment he arrived there he was struck with remorse. He deeply repented his apostasy and could not eat nor sleep. He spent all his time in grief, tears and prayers of repentance.

Encouraged by his fellow Catholics he decided to confess his faith. He went to the court to surrender himself and tell the judge that he would retract his apostasy.

“What have you come back for?’ the guards asked.

“I betrayed the Church but now I repent. I must retract my denial of the Church as the truth. As a faithful believer in Christ and the Church I will do penance for my sin. I must tell the judge this.”

“See here, you idiot! What you have done cannot be undone. You cannot change it, so clear off,” the guards replied.

The guards ignored him and treated him as an insane man while Protasius kept going to the court. But the guards did not allow him to see the judge.

On the third day he went back again. Protasius was plagued by sickness so he walked with great difficulty. Again the guards refused to admit him to see the judge. This time he waited outside the court until the judge came out, and finally met him. This was May 12.

Protasius told the judge that he wanted to retract his apostasy saying,

“I am a sinner but I have repented my apostasy. I am a Cahtolic believer and have come to do penance for my sin. I want to die as a Catholic. Please have me killed.

“The judge who was annoyed with his persistence finally ordered to put him back in prison. Once inside the prison Protasius gave thanks to God. He was welcomed by his fellow Catholics in prison and overwhelmed with the joy of returning to the Church and becoming a martyr.

The day Protasius returned to prison the two sisters, Kim Hyo-im Columba and Kim Hyo-ju Agnes, gave witness to their faith in God by bearing their tortures bravely.

Protasius was taken out to the court again, and was beaten with a cudgel twenty-five times. Because he had gone back on his denial the torturers beat him with more ferocity, leaving already weak Protasius close to death.

Seeing he was suffering from typhoid fever, the guards returned him to prison. When he returned to prison he was half dead. He died a few hours later of that night. It was May 20, 1839. He was forty-one years old.

Chong Kuk-bo Protasius was the first to win the martyrdom after the government’s order to persecute Catholics was issued in April, 1839. His initial weakness was turned into victory by his true faith.

Like the apostle Peter, Chong Kuk-bo Protasius stands as a model of repentance. At the time of his death he inspired many others to repent of their weakness and denial of the truth. He continues to be an example for us today.

Chong Kuk-bo Protatius was canonized on May 6, 1984 at Yoido Plaza, Seoul, by His Holiness Pope John Paul II.