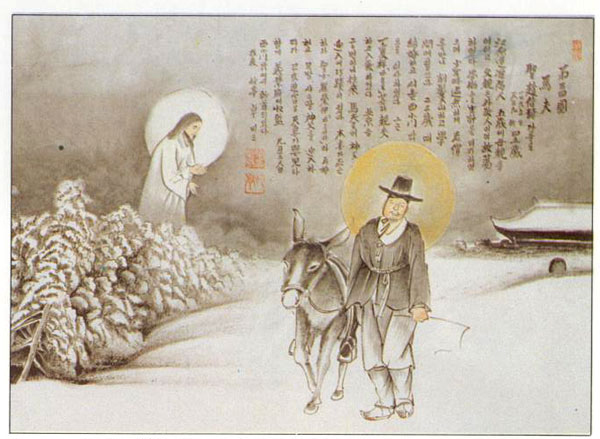 Charles Cho Shin-chol was born in Hoeyang, Gangwon-do, and his family was pagan. He lost his mother at the age of five and his father squandered all the family's properties. For several years at one time Charles in his poverty went to a Buddhist temple for a meager living. One day he was asked to work as a servant for one of the envoys traveling to Peking. Charles accepted the offer. He was 23 years old. He was honest, unselfish and brave, so he was respected by his comrades and was regarded as one of the most outstanding servants of the envoys. With some of the money he earned on the Peking trips, he helped his father and his brothers.

In the meantime, Augustine Yu Chin-gil and Paul Chong Ha-sang noticed him and decided to ask him to be a Catholic. At first Charles hesitated, but later he became a fervent Catholic. While Charles was in Peking, he went to visit the bishop of Peking and other missionaries with Augustine and Paul. He was baptized and confirmed by the missionaries in Peking and received the Holy Eucharist from them.

According to the Vatican records, Charles, after his return to Korea, worked very hard for the Church. He was humble, kind and charitable, and he gave good example to others, and converted many. He brought at least ten to the Church. The most difficult one to convert was his wife. Charles never ceased to persuade her, and she finally became an excellent Catholic. She died happily as a Catholic. Charles then married another Catholic woman and continued his work going to and from Peking. After the missionaries came to Korea, Charles helped them, particularly Father Maubant, accompanying him on his mission visits as an assistant and sometimes as an interpreter.

Charles used to say that he wanted to follow the Way of the Cross. On his way back from Peking, in the spring of 1839, he had a dream in which he saw Jesus between the Apostles Peter and Paul on Mount Tabor. He heard Jesus promising him the crown of martyrdom. Charles had another similar dream. When he was back home, he realized that the dream was a hint from the Lord, and he made up his mind to become a martyr.

While he was out, policemen arrested his family and all the people living in his house, including children. Upon his return home, he went to the police station and told the police that he was the owner of the house where the people had just been arrested. Thus Charles was also arrested and put in prison.

In his home the police found many Catholic books, rosaries, medals and other religious articles, which Charles had brought from Peking. The police chief asked Charles where he got all the religious articles. Charles said that the articles were purchased when he was in Peking. But Charles refused to reveal from whom he got the articles, so the police chief twisted his arms and legs, hung him in the air and beat him.

When Bishop Imbert was arrested, Charles was more severely tortured and commanded to reveal the whereabouts of the other two missionaries, Fathers Maubant and Chastan. The police chief also brought in Bishop Imbert and questioned them together. Charles was twisted, sawed with ropes, and his shins were beaten with sharp-angled clubs. But Charles kept silence. The police chief said: "His body is just like a piece of wood or iron." After Fathers Maubant and Chastan were arrested, he was sent to the higher court with the missionaries. He was beaten there on three more occasions.

Just before Charles was taken to the site of execution, he asked one of the prison guards to relay his last message, telling his family to follow him to Heaven.

Charles was taken outside the Small West Gate and was beheaded on September 26, 1839, with eight other Catholics. He was 45 years old when he received the crown of martyrdom.