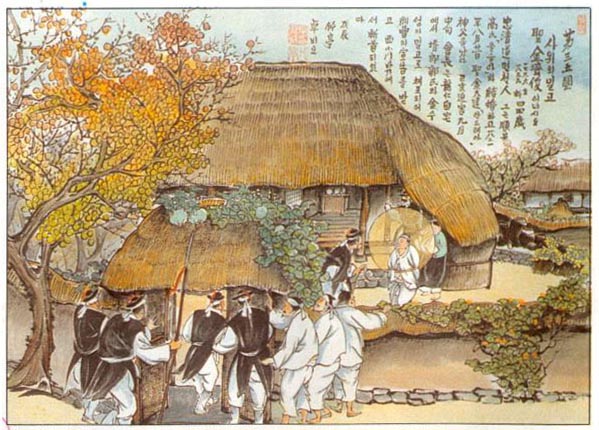 Ignatius Kim Che-jun was a grandson of Pius Kim Chin-hu, who was martyred in 1814, and the father of Father Andrew Kim Tae-gon, the first Korean priest, who was martyred in 1846. Ignatius led a very devout Catholic life as long as he lived. When his son was selected by the missionaries to be sent to Macao to study for the priesthood, Ignatius realized the danger that his whole family might face by sending one of the family members abroad. It was a brave action on the part of Ignatius.

Ignatius was accused by one of his sons-in-law and was arrested by a group of police led by the traitor Kim Yo-sang. According to a witness, Ignatius was strong enough to resist several men, but he allowed himself to be arrested with no resistance.

Ignatius was treated as a criminal against the state, not only because he was a Catholic himself, but because he allowed his son Andrew to go to Macao against the state law. Witnesses do not say what kind of tortures he received, but he must have undergone much more cruel tortures than others. Ignatius denied his religion under the tremendous, overpowering tortures. Despite the fact that he denied his religion, he was not released from prison, because his crime of having allowed his son to go abroad could not be forgiven.

The Catholics around him in prison tried to convince Ignatius that he would never be released even if he denied his religion. They persuaded him to change his mind, withdraw his apostasy and profess his faith again to the government officials.

The Apostle Peter denied the Lord three times, but he repented. Ignatius too rose again and went on to die as a martyr. He appealed to the higher court and withdrew his apostasy. He was severely beaten on three occasions, but this time Ignatius was strong and courageous.

Ignatius received the crown of martyrdom. He was beheaded outside the Small West Gate on September 26, 1839, with eight fellow Catholics. He was 44 years old when he was beheaded.