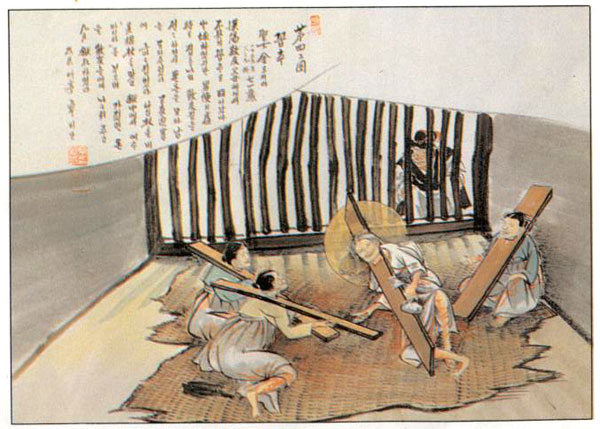 The common sentiments in the soul of a martyr are faith and courage. It is surprising to find such sentiments abundantly in a woman like Kim Lucia. God's grace and her deep faith and humility combined together to make a simple woman an heroic martyr.

Lucia was usually called "Hunchback Lucia." She seems to have been a Catholic since her youth. She married a pagan man; but, since her husband did not want her to be associated with her fellow Catholics and to fulfill her religious duties, she left him and lived in many different Catholic homes. The Catholics were glad to welcome Lucia. She used to help them with housekeeping and take care of children and sick people in order to return their kindness.

Although Lucia was an uneducated woman, she loved God, had zeal for souls and converted many people. Lucia once explained about hell to a nobleman. He said, "You say that hell is a very narrow place. How can it hold so many people?" Lucia replied, "You have never thought that a small heart, which can contain ten thousand books, is too small or too narrow." The nobleman was amazed that the unlearned woman could speak so eloquently.

In prison Lucia was a weak and old woman 71 years of age, but she helped sick inmates and gave them even the small amount of money she had.

When the police chief asked her to deny God and reveal the whereabouts of her Catholic friends, she simply said that she wanted to die for God. Old Lucia was whipped 30 times. People said that it sounded like they were beating her bones. When she returned to prison, she was so sick and tired that she was never able to get up again. About three days after her beating, around the end of August or the beginning of September of 1839, Lucia expired, calling the holy names of Jesus and Mary and attended by some Catholic women in prison. She was 71 years old when she died for her faith.