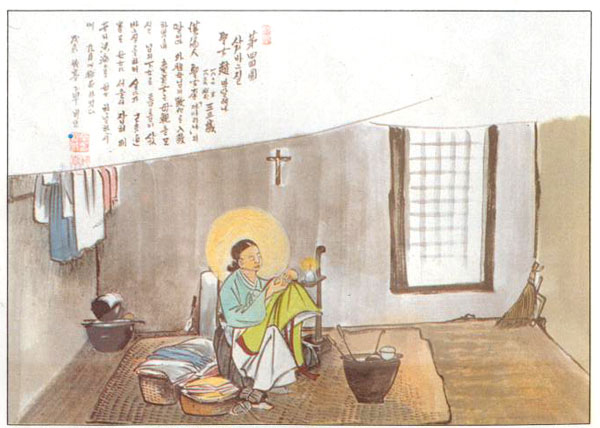 Yi Catharine and Cho Magdalene were mother and daughter. They were arrested together, put in the same prison and died for Jesus Christ almost at the same time. Although they lived very poorly in this world for many years, God gave them an eternity of heavenly riches.

Catharine, the mother, was born to a Catholic family, which, however, hadn't been too well instructed in Catholic doctrine. She was married to a pagan man, but she converted her husband. She raised and educated many children to love God.

Magdalene went to Seoul, in order to avoid her annoying family and other people's suspicions, and became a servant in a Catholic family. She fell ill, however, due to hard work and malnutrition. After she recovered, she moved to another easier place. She made some money and sent it to her mother.

When Magdalene was over 30 years old, she returned to her mother, thinking that nobody would bother her to get married. She taught illiterate catechumens, took care of sick people and baptized pagan children in danger of death. She was genial and humble. She was unselfish and always took the more difficult work upon herself, leaving the less difficult work to others.

In order to avoid local persecutions, Catharine decided to move to Seoul with her daughter Magdalene. Bishop Imbert heard that they had come to Seoul and helped them find a place to stay in a Catholic home. However, they lived peacefully for only a short time. Seoul proved to be a more dangerous place for Catholics than the countryside. They decided to face the persecution in Seoul courageously.

One day some of their friends gathered in their home and talked about the fact Bishop Imbert was being hunted by captors. Magdalene suggested, and others agreed, that they would give themselves up if Bishop Imbert was arrested. The pious women didn't have to wait long for an occasion to give themselves up. Five of them were arrested a month later in late June or early July of 1839. Catharine was 57 and Magdalene was 33 years old at that time.

Of course, they didn't succumb to the demand of the police chief to deny their religion, and they were severely tortured. After severe beatings and tortures, they were sick in prison for some weeks. Although they wanted to be martyred, they died of sickness in prison at the end of September or the beginning of October, 1839. One after the other, at an interval of a few days, they died happily, glorifying God.