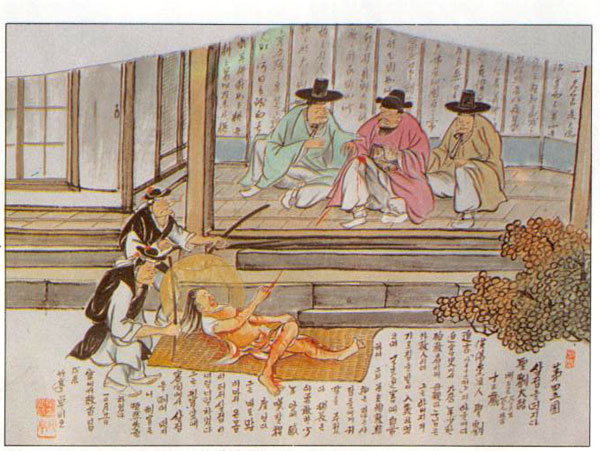 Yu Tae-chol Peter was only 13 years old when he was martyred. His father, Yu Chin-gil Augustine, was martyred, but his mother would not become a Catholic, and tried very hard to hinder her son from practicing his faith and to force him to offer sacrifices to the ancestors. His mother and his sister asked Peter why he would not obey his mother. Peter gently replied that it was not proper to obey his mother and disobey the Heavenly King and the Father of all creatures. In other matters, except faith, Peter obeyed his mother faithfully and tried not to offend his family.

When the persecution broke out, Peter had an ardent desire to be a martyr. Deeply moved and impressed by the heroic example of his imprisoned father and other martyrs, young Peter could not control his emotional love for God and gave himself up to the government authorities in July of 1839. After interrogations the judge found out that Peter was the son of a Catholic family and put him in prison. Peter was taken to the court. The judge tried every means to have Peter deny God. Peter was persuaded, threatened and tortured, but would not deny God.

One day a prison guard hit Peter hard on his leg with a long tobacco pipe, and a piece of his flesh was torn off. The prison guard said, "Do you still believe in God?" Peter answered, "Yes, I certainly do. I am not afraid of being hit." The prison guard threatened to put a burning charcoal into Peter's mouth. Peter opened his mouth and said that he was ready. The prison guard could not bring himself to put the charcoal into Peter's mouth. All those in prison admired his courage. One day Peter was beaten so severely that he fainted. After his fellow inmates helped him recover consciousness, he said, "Don't worry. I will not die because of this pain."

Peter was interrogated 14 times and was tortured on 14 different occasions. He was whipped 600 times and beaten with a cudgel 45 times. His whole body was covered with wounds, his bones were broken and his flesh was torn off. But it is truly miraculous that young Peter always had a happy, smiling face. His courage can truly be called a miracle. His love of God seemed to change his face and ridicule the torturing adults. Peter took a piece of flesh falling off his shoulder and threw it to the prison guard. Everybody around him was surprised and embarrassed. No one could believe that a young boy of 13 years of age was so severely tortured, but there were at least ten witnesses who testified to Peter's tortures and courage.

The government officials wanted to beat Peter to death, but courageous Peter did not die. So he was strangled to death in prison on October 31, 1839 at the age of 13.

Yu Peter is one of the greatest martyrs of Korea. He is a model for all Korean children. Korea is very proud of the youngest of its 103 martyrs saints.