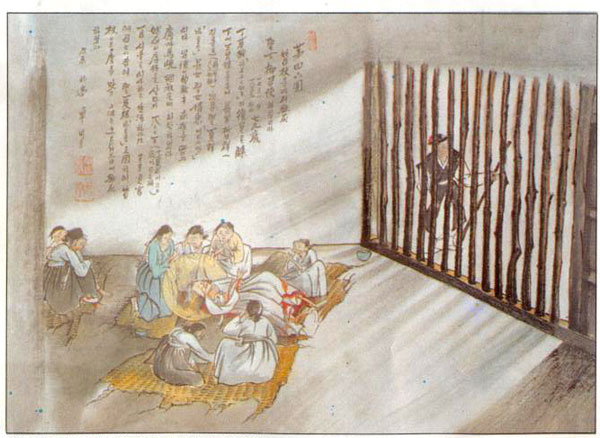 Yu So-sa Cecilia was the second wife of the famous Chong Yak-jong Augustinus, martyred in 1801, and the mother of Chong Ha-sang Paulus and Chong Chong-hye Elisabeth. Cecilia became a Catholic through the persuasion of her husband and showed a great deal of courage and faith. When her husband was arrested, she was also arrested with her three children. She was released later with her children, but all her belongings were confiscated. She went to live with her husband's brother in Majae (Mahyon) in Gwangju, Gyeonggi Province, but he did not treat her well.

Most of her relatives were martyred, including her children, Paulus and Elisabeth. One night she dreamed of her martyred husband who told her in the dream that he had built a house in heaven with eight rooms, of which five were occupied and three were vacant, reserved for her and their remaining children. Indeed, five of her eight family members had already been martyred. The dream was a source of great encouragement for Cecilia.

Her son, Chong Ha-sang Paulus, was deeply involved in getting foreign missionaries into Korea, and Cecilia had been separated from him for many years. The separation was a painful trial for her. When Paulus became an assistant to the bishop and other priests, she followed them and lived with her son.

When she was too old to do any work, she spent her time in prayer. Her charity was so great that she sometimes fasted to feed others.

In 1839 one of her nephews provided a house in the countryside for Cecilia and asked her to come down to escape from the persecution. But Cecilia refused to go and said that she wanted to be martyred with her son Paulus.

Cecilia was arrested on July 19, 1839, at the age of 79. Despite her age, she was treated as an important criminal, probably due to her family's fame. Since she refused the demand of the police chief to give up her faith and reveal the whereabouts of her fellow Catholics, she was whipped 230 times during the first five interrogations.

Cecilia wanted to be beheaded to become a martyr, but the Korean law of that time prohibited an old person from being beheaded. The judges tried to beat her to death, but she endured all the beatings with courage and patience. She finally expired in prison on the bare ground, calling the names of Jesus and Mary. It was November 23, 1839, and she was 79 years old.