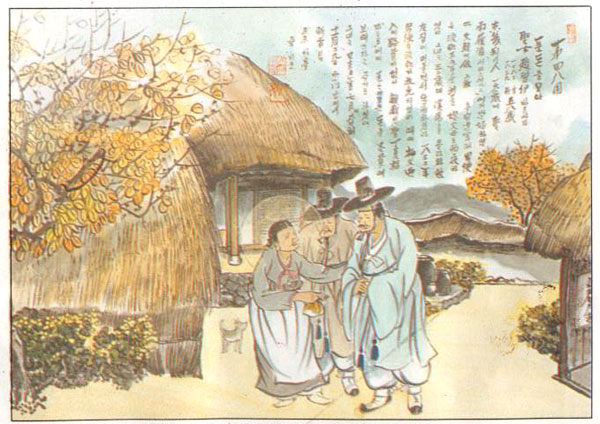 Cho Chŭng-i Barbara was the wife of Nam I-gwan Sebastian. She was born in 1781 to a renowned noble family. She was married to Nam Sebastian when she was 16 years old and gave birth to a son who died soon after birth.

During the persecution of 1801, many of her relatives were martyred, and her husband was sent into exile. Barbara lived with her younger brother, but he made her very unhappy. She could not practice her religion faithfully, because there were no priests in Korea at that time, and she lived far away from other Catholics. When she was about 30, she came up to Seoul and lived with a very devout Catholic family. Barbara then had a chance to practice her religion faithfully.

She was a cousin of Chŏng Ha-sang Paul, and helped him to prepare for his trip to Peking to introduce foreign missionaries into Korea. After Father Yu Pacificus came to Korea, Barbara's husband was released from exile in 1832, and she was able to help the Chinese priest. After Father Yu returned to China, Barbara bought a small house in which she had Fathers Maubant and Chastan and Bishop Imbert stay. The Catholics used to come to her home for prayers, confessions and Masses. She used to say: "If a persecution breaks out, we all must die. We must train ourselves by mortification in order to glorify God and save our souls."

Barbara was arrested in July of 1839. She continued to refuse the demands of the police chief to deny her faith and to reveal where her husband was hiding. She said: "Even if I have to die ten thousand times, I cannot commit a sin." Consequently, she was severely tortured. Her legs were twisted, and she was beaten with a cudgel 180 times. Even after she was sent to the higher court, she was beaten more severely. Her husband, after his arrest, was also severely tortured. Both of them showed courage and a desire to die for their faith.

Barbara was kind to the other inmates and consoled them. She said goodbye to them, and then fell asleep. She woke up just before she was taken out for execution.

Barbara was taken outside the Small West Gate and was beheaded on December 29, 1839 with six other Catholics. She was 58 years old when she was martyred.