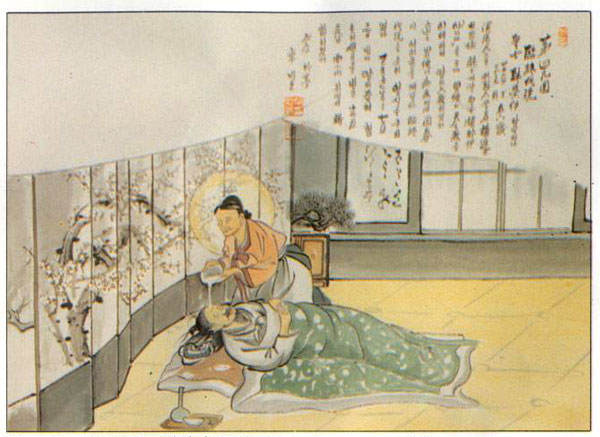 Han Yŏng-i Magdalene was the mother of Kwŏn Chin-i Agatha. When Magdalene was young, she married Kwŏn Chin, a scholarly government official belonging to a noble family. Kwŏn became a Catholic when he reached middle age, and he also had his wife Magdalene become a Catholic. He was baptized on his deathbed and asked his wife Magdalene to live as a Catholic for ever. After that, Magdalene lived a very poor but very devout life. Although she was very poor, she didn't complain but thanked God for her poor life.

Magdalene's daughter, Kwŏn Chin-i Agatha, came with her friend, Yi Agatha, to live with her mother. The three women lived together fervently, practicing their faith and doing many acts of mortifications.

Magdalene was accused by an apostate and was arrested on July 17, 1839, together with her daughter Agatha and the daughter's friend. Magdalene was put in one prison, but her daughter Agatha and two other women were put in a neighboring prison under guard. The traitor, Kim Yo?sang, tempted Kwŏn Agatha to be his mistress, but she wouldn't listen to him. She was released by the police who had pity on her youth and beauty. The policemen who helped Kim Yŏ-sang were punished by the government. Later Agatha and two other women were arrested again.

Meanwhile, Magdalene was being severely tortured. She was twisted and beaten, but her faith and courage persevered. She was calmly and peacefully waiting for the glorious crown of martyrdom.

She was finally beheaded on December 29, 1839, outside the Small West Gate with six other Catholics. She was 56 years old.