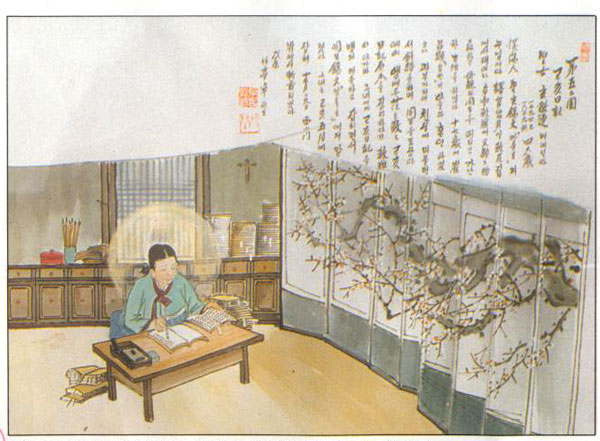 Benedicta married a son of the glorious martyr Ch'oe Ch'ang-hyŏn in 1811, but her husband died three years later. Since she had no children, she returned to her mother and made her living by sewing, thanking God for her peaceful life.

The people around her admired her for her pious and peaceful life, dedicated to prayer, meditation and spiritual reading. Benedicta made some money from sewing, but she gave the money away. She also made great efforts for other people's sanctification, teaching illiterate catechumens, encouraging lukewarm Catholics, consoling sad people, taking care of the sick and baptizing pagan children in danger of death. During visits of the missionaries, she gathered the Catholics in her home to prepare them for the sacraments.

At an early stage of the persecution, Benedicta, who had become a catechist, was in hiding, but she was arrested in June or July. As the government officials knew that Benedicta was a sister of Hyŏn Sŏng-mun Charles, who played an important role for the missionaries, they tortured her more severely in order to find out where her brother was hiding. She was interrogated eight times. The police tortured her very severely to get information about missionaries, because they wanted to get the reward set for arresting the missionaries. But their greedy efforts were in vain due to the strong will of Benedicta. After she was moved to a higher court, she was beaten so severely that she could hardly move her legs. The wounds on her body were so deep that blood and pus oozed out ceaselessly. She also suffered from cholera in prison.

Benedicta sent a letter to her brother Charles. The letter is not preserved today, but many Catholics who read the letter were deeply impressed. A few hours before her execution she had a sound sleep. She was happy to be taken outside the Small West Gate to be beheaded with six other Catholics on December 29, 1839. Benedicta was 46 years old when she was martyred.