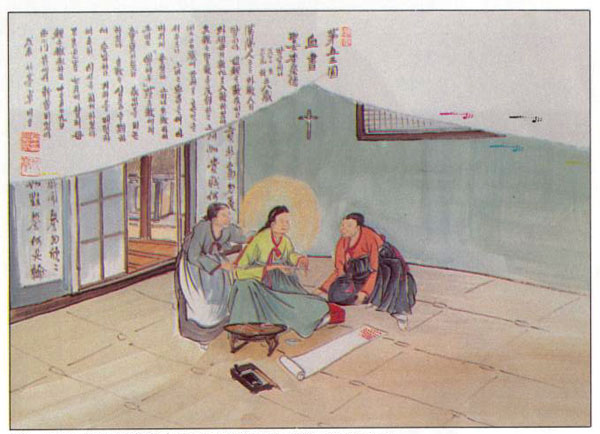 Yi Yŏng-dŏk Magdalene was an elder sister of Yi In-dŏk Mary. Magdalene was born in 1811 to a noble family, but her family was very poor.

She always behaved with dignity, and had a warm personality. She was instructed in the Catholic faith by her grandmother and became a Catholic with her mother, Cho Barbara, and her sister, Yi Mary. Her father was, however, very anti-Catholic.

At the age of 20, her father tried to arrange a marriage for her to a non-Catholic. She refused the marriage by pretending to be sick. Her father was not taken in by her excuse, and treated her cruelly. One day, in order to have her father understand her, she wrote a letter in blood from her finger and gave it to her father. But her father would not yield. At the age of 27, Magdalene asked Bishop Imbert for permission to leave home. But the bishop told her to remain at home. After a few months, however, she could no longer endure, and she escaped to a friendly Catholic home with her mother and sister. The bishop insisted that they should return home. It was very dangerous for them to return to the father. The bishop finally let the catechists decide what to do in the situation. Magdalene was able to stay in Seoul, and led a pious life even in poverty.

Magdalene dedicated herself to virtue, good works and prayer, and waited for the glory of martyrdom.

Magdalene was arrested and put in prison. Her body was twisted. She suffered from hunger, thirst and the dirty environment of the prison. Magdalene saw her mother die of a fever in prison. She was beaten many times but never ceased to profess her faith.

Magdalene was beheaded with six other Catholics outside the Small West Gate on December 29, 1839, at the age of 28.