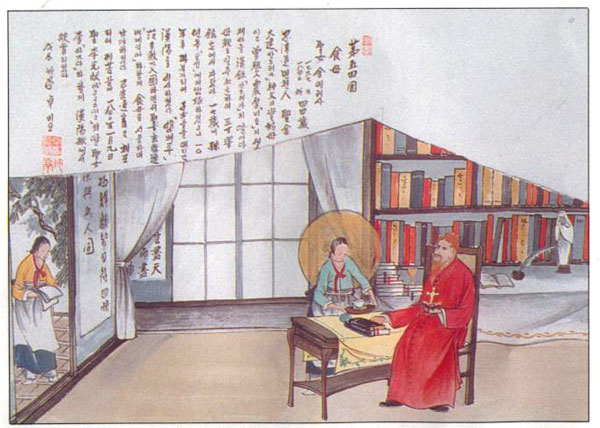 Kim Theresa(1797-1840), born in Myonch'on, Ch'ngch'ong Province, was from a family of martyrs. She was an aunt of the first Korean priest, St. Kim Tae-gon Andrew and a cousin of his father, St. Kim Che-jun Ignatius. Both her grandfather, Kim Chin-hu Pius, and her father, Kim Han-hyon Andrew, witnessed for Jesus Christ by dying for their faith after long-term prison life and severe torture. Theresa's mother died earlier.

Letters by her father to friends and family members show his spirit of martyrdom and give an idea of Kim Theresa's life and her mother's.

"Time files. It is already a year since we parted last. I thank God that you have managed to survive this harsh winter without major problems, in spite of the limitations on your freedom. Since they have imprisoned me for my faith, I find prison to be a marvelous environment. Due to my sins it seems I am not worthy of martyrdom yet. I cannot bear any fruit but am like a tree in the forest."

"Time is precious, once lost we can never gain it back. If we do not make an effort, what hope of success can we have? If missed opportunities lead to losses in this world, how much greater will be the loss if we miss the opportunity to save our soul?

"I entered the Church with nothing else in mind than to serve God and save my soul. And, although momentarily I had doubts whether anything good would happen, deep in my heart I have not doubted in the least. However when I read about my poor wife's situation, my heart is filled with sorrow and pain. I refer to the fact that my wife has no one to rely on in this freezing winter. Previously she stayed with relatives or friends, but now no one is willing to help her for fear of being associated with me. They are cautious about getting into trouble. It is indeed a cruel and heartless situation.

"In coming into the Church to serve God and to save our souls, we were asked to make great sacrifices. We have to leave our homes and move to places far away where we are strangers. I believe, for better or for worse, this is the will of God. If accepting all things, good and bad, from the hands of God is a way of ensuring salvation, then accepting and helping those in need must be another way. I beg you, look after my wife who has nowhere to go. This will contribute to your own salvation. The Church is one body. The universe also is one. How can anything survive that does not have its basis in love and unity? Many parts make up the body. But how can one part say it does not love the other parts, or betray them? They must help and support each other. Each person is independent, but God is the head." (From a letter to Yi Saeng-won).

"In Kyongsang Province over one hundred men and women, young and old, have been arrested. Among them some have died of starvation in prison and some died while being transported here. Some with weaker faith have given in, so there are now only thirteen of us left. With God's grace we are surviving. Indeed we are full of gratitude. However, because I am not physically strong it is difficult for me to endure these things joyfully. (From a letter to his brother)

"If you suffer willingly for Jesus you will become God's elect. Everything depends upon one's choice of good or evil. Therefore, I appeal to you to suffer bravely whatever happens to you.

"I have been in this prison of suffering for over a year, but with special grace I am well. I thank God for this grace and can only hope for the final grace of martyrdom. However, I am afraid that I may not be worthy of this grace. The easy life makes the soul weak and as the soul weakens the power of the flesh grows. I am afraid that if I miss this opportunity it will never come on my way again. ... I earnestly pray that God will soon bring me to my destination." (From the 2nd letter to his brother)

Kim Theresa was genial and charitable. At the age of 17 she married Son Joseph who later died for his faith in the Haemi prison. She had many children whom she raised to love God. After she became a widow at the age of 32, she led a life of mortification by fasting each Wednesday and Friday to the extent that she can be called as an exemplary Christian wife and widow. From her youth, Kim Theresa possessed strong will that showed in her spirit and appearance.

When Father Yu Pacificus, a Chinese priest, came to Korea, Theresa was selected to be a housekeeper for him. She was admired by Father Yu and others as an example of Christian life for doing her work so well. After Fr. Yu left Korea, Theresa became one of those women who took care of the housekeeping for Bishop Imbert even though she was in danger of being arrested. She didn? escape and was arrested on July 19, 1839, at the age of 44, and didn't stay in prison too long. She was steadfast in her faith and didn't reveal the whereabouts of the missionaries and her fellow Catholics, so she was whipped 300 times. After six months of suffering in prison, Theresa was strangled to death in Seoul on January 9, 1840.