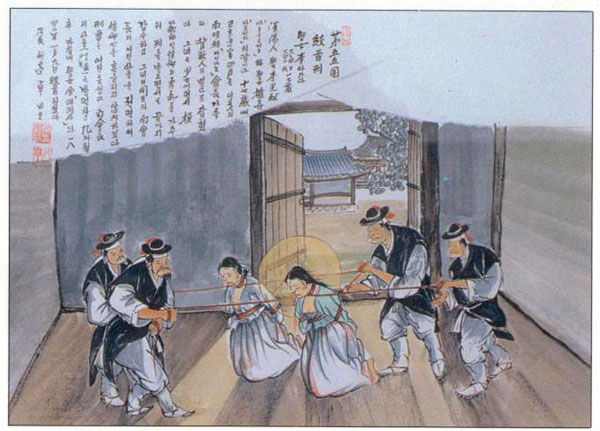 Yi Agatha was put in prison with her father, Yi Kwang-hŏn Augustine, and her mother, Kwon Hŭi Barbara, on April 8, 1839, when she was 17 years old.

Agatha was repeatedly interrogated and tortured. The police chief tried to persuade her to renounce her faith. Since he was not successful, he used violent means to force her to surrender. He was surprised that even violence was not effective. The young girl endured the threats and tortures so courageously that the people around her could hardly believe the strength of divine grace.

It was a miracle that Agatha was able to preserve her virginity living among the prison guards who were like beasts.

The prison guards lied to her, telling her that her parents had given up their faith and had been released from prison. Agatha answered for herself and for her brother Damian, saying: "Whether or not our parents denied their religion is not our business. We cannot deny God!"

Agatha was whipped 300 times and beaten 90 times. All these sufferings, thirst, hunger and sickness did not discourage her. Throughout all her sufferings she was thinking of her father, beheaded on May 24, 1839, and her mother, martyred on September 3, 1839, trying to imitate their example. Agatha, after nine months of imprisonment, was strangled to death in Seoul on January 9, 1840, at the age of 17.