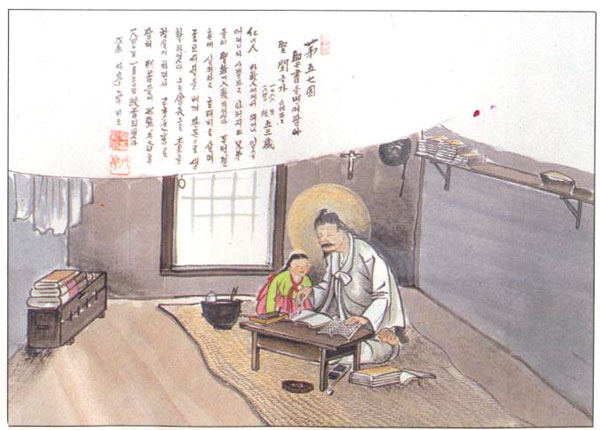 Min Kŭk-ka Stephen was a descendant of a noble family. He had a strong and warm personality. He was born to a non-Catholic family, and his mother died when he was quite young. He was baptized with his father and his brothers, and practiced his religion faithfully. He married a Catholic woman, but she died soon after the marriage. He did not want to remarry, but his friends persuaded him to take another Catholic wife. The second wife also died six or seven years later, and his daughter from the second wife died soon after.

After that Stephen made his living by handcopying books. He was very devout and converted non-Catholics by his good example and teaching. Since he was named a catechist, he made greater efforts to teach people and to convert non-Catholics.

Stephen was arrested at the end of the persecution. He was tortured and told to renounce his faith. His body was twisted and pricked with sharp objects. But he used to say: "I can never deny God, even if I am beaten ten thousand times. If you release me, I will not only continue to believe but also to spread the faith." They beat him more severely. He was beaten with a large club 40 times. He spent his days in prison persuading apostates to change their minds and profess their faith again.

Catechist Min Stephen was taken out to the court again and beaten with a club 30 more times. A few days later he was strangled to death in Seoul on January 30, 1840. He was 53 years old.