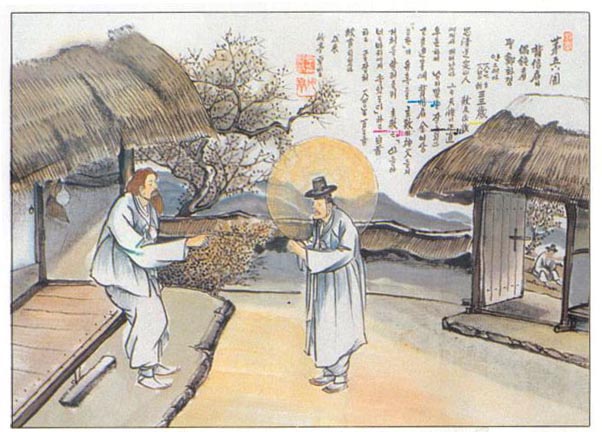 Chŏng Hwa-gyŏng Andrew was a very dull man who was easily deceived. As a result a bishop and many Catholics were arrested. Kim Yŏ-sang, the traitor, told him that the government people in Seoul were becoming Catholic and would welcome the French missionaries. Andrew foolishly believed them and led a group of captors to Bishop Imbert, whom they arrested.

Andrew was born in 1807 to a wealthy Catholic family living in Ch'ŏngsan in Ch'ungch'ŏng Province. In order to practice his religion more freely, he left home and moved to Seoul. He helped the Church as much as he could. But even after Bishop Imbert was arrested, Andrew was deceived again by the police. They told him that there would soon be freedom of faith and they then had some new Catholics arrested.

The policemen tried to arrest Fathers Maubant and Chastan through Andrew, but Andrew finally realized his foolishness and didn't reveal the whereabouts of the missionaries. Instead, he quietly went to the missionaries and told them to escape. Andrew confessed his sins, and then wanted to give himself up to the government authorities.

He was finally arrested, and the police chief demanded that he renounce his faith. Although Andrew was foolish, he had a strong faith. He continued to refuse the police chief's demand and endured all the pains of being twisted and stabbed. He was beaten more than a hundred times and was strangled to death in Seoul on January 23, 1840, at the age of 33.