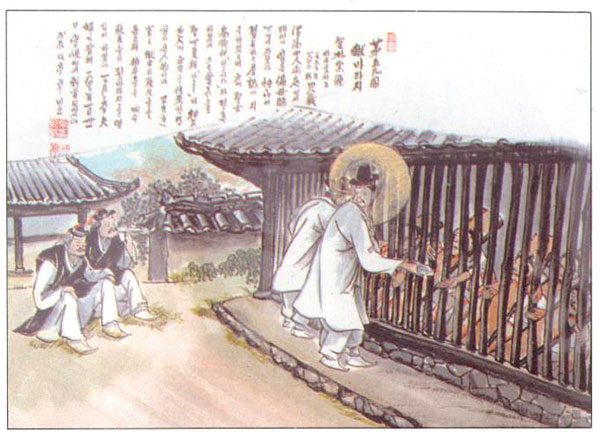 Pak Chong-won Augustine was the husband of the martyr, Ko Barbara. He was born in Seoul. He had a warm personality, was kind and an excellent scholar. He was also an able man.

Since he lost his father when he was still young, he had to live in poverty, but he didn't complain. He was loyal to his mother, and performed his duties faithfully. He married Ko Barbara. He was very charitable. He taught and encouraged Catholics as well as catechumens. He baptized many children in danger of death. He used to say: "As Jesus loved me, I have to love Him. As He suffered for me, I have to suffer." He had an ardent desire to be a martyr.

Augustine tried to advise others to correct their faults. He showed sorrow on his face when he saw someone in a sinful state. But his manner of doing these things was so kind that people were not offended. People used to say: "We have never seen Augustine getting angry." Augustine took the initiative in difficult situations. He made great efforts to introduce missionaries into Korea. His talent and virture were acknowledged by Bishop Imbert, who appointed him a catechist. Augustine performed his duties as a catechist admirably.

When the persecution broke out, Augustine left his home and continued to take care of his fellow Catholics, particularly those in prison, for eight months. He was finally arrested on October 26, 1839. He was interrogated and tortured many times and so severely that he couldn't move his arms and legs, but he showed no sign of his agony. His flesh was torn apart, but he was happy to suffer for God.

According to the government report, Augustine explained Heaven and Hell clearly and refused to offer sacrifices to his ancestors.

Augustine was taken out to Tang-kogae near Seoul, and was beheaded there with five other Catholics on January 31, 1840, at the age of 48.