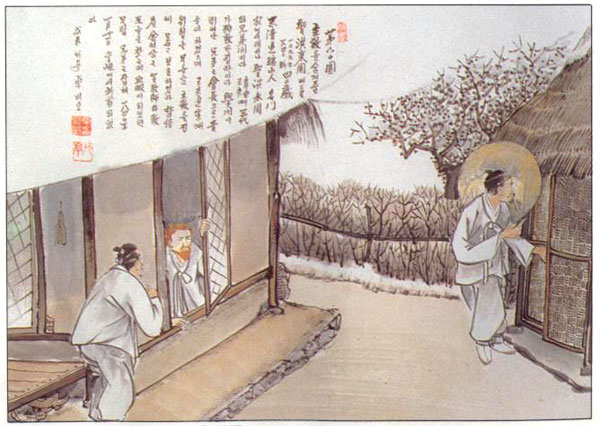 Hong Pyŏng-ju Peter and Hong Yŏng-ju Paul were brothers. They were grandsons of Hong Nang-min martyred in 1801 and nephews of Hong Protasius who was martyred in 1839. They were descendents of a renowned family and lived in Sŏsan. They inherited their faith from their parents which enabled them to uphold the Catholic religion as well as to contribute a great deal to the Catholic Church in Korea.

Both of them were named catechists, and they showed enthusiasm and faithfulness in giving instructions to catechumens. They dedicated themselves to teaching catechism, taking care of sick people and to other charitable activities. Therefore, Fathers Maubant and Chastan admired their talents and zeal and gave them various important responsibilities.

They risked their lives to hide the foreign missionaries in their home during the persecution of 1839. The traitor Kim Yŏ-sang put them on the list of those to be arrested.

The Hong brothers were finally arrested. Their captors tried to force them to reveal the whereabouts of their fellow Catholics and to deny their faith, but they did not succumb to the demands. They did not reveal the location of their fellow Catholics. They were brought to the chief prosecutor, who happened to be one of their relatives. He did not want to torture them directly, and asked his men to torture them severely to make them give up their faith. Other inmates, robbers and murderers, beat Peter and Paul for the prosecutors. However, Peter and Paul remained steadfast in their faith.