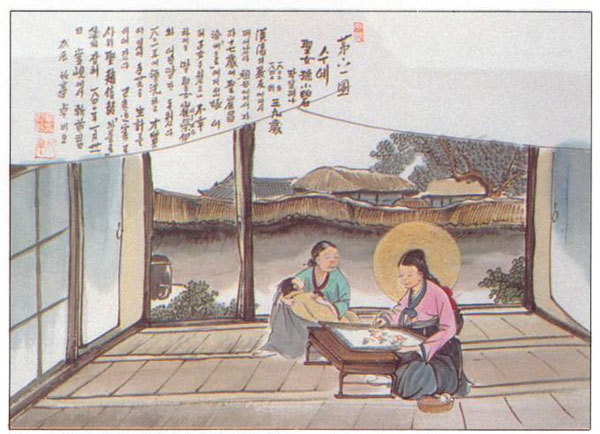 Son So-byok Magdalene was the wife of the martyr Choe Chang-hub Peter. She was born in Seoul. Since her father was exiled for his faith and her mother died early, Magdalene lived with her grandmother. The unfortunate situation of her family made her shy and she kept away from other Catholics, so she learned the Catholic religion late.

When she was 17 years old, she married Choe Peter who was martyred before her. She gave birth to eleven children, but nine died in infancy. She had a genial character and soft-spoken manner, and she was famous for her excellent talent in sewing and embroidery.

During the persecution of 1839, she was hiding with her relatives, but finally she was arrested. The police chief interrogated her.

"Reveal where your fellow Catholics are, and deny your God."

"I don't want to do any harm to my fellow Catholics by revealing where they are. I can never deny my God."

"If you say just a word, you will be freed and live with your husband and your children, but if you are stubborn, you will be killed."

"My life is not mine. I cannot deny my God in order to save my life."

Magdalene was interrogated seven times, her body was twisted three times, and she was beaten with a club 260 times. Her flesh was torn apart and she was bleeding profusely, but she thanked God for giving her strength to endure all the pains.

Magdalene brought her two-year old youngest daughter into prison, which was dark with no fresh air. There was not enough food, so Magdalene sent her child to one of her relatives, because she thought the child might weaken her will for martyrdom.

According to the government record (Seungjeongwon Diary), Magdalene was finally taken out to Tangkogae near Seoul and with five other Catholics she was beheaded there on January 31, 1840, at the age of 39.