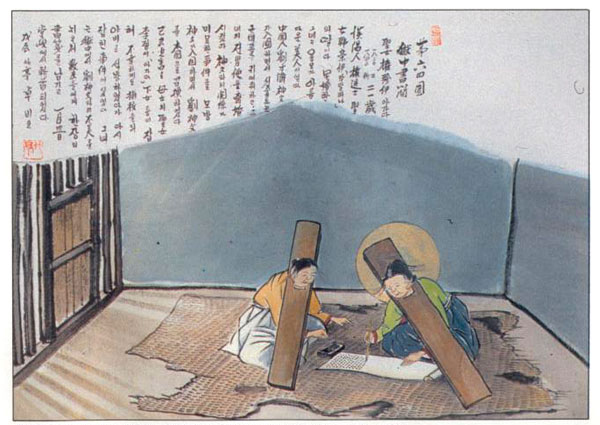 Kwon Chin-i Agatha was a daughter of a government official, Kwon and his wife, Han Magdalene, who was martyred on December 29, 1839. She was married when she was 12 or 13 years old. But Agatha lived with one of her relatives, because her husband was too poor to have a home. They had merely performed the marriage ceremony.

When the Chinese priest, Yu Pang-che Pacificus came to Korea, Agatha worked for him as a housekeeper. Agatha told the priest that she wanted to keep the virtue of virginity, and the priest had her marriage annulled so that she could be a virgin. Soon afterwards rumors began to spread about their relationship which were to do great harm to the Church. Because of this, when the French priest, Father Maubant arrived he had Father Yu sent bank to China. He also called Kwon Chin-i Agatha aside and awakened her to the situation she had helped create. As a result, the rumors which had disturbed the minds of the believers for many months began to subside. Agatha also realized how her actions had unwittingly caused a serious problem. She was repentant and determined to make up for it by offering herself as a martyr to God.

Kwon Agatha was arrested with Yi Agatha and a servant girl on July 17, 1839. They were brought to a private house under surveillance of a guard. However they escaped with the help of the policemen and hid themselves in a Catholic home in Seoul. But the servant girl, who was captured first, told the captors where the two Agathas were staying, and they were arrested again. Many severe tortures could not make them deny their faith.

Kwon Agatha met her mother, Han Magdalene, in prison and they had their last conversation, looking forward to their eternal happiness in Heaven.

Agatha sent a letter to one of her friends. The letter was full of fervent affection and obedience to God's Will. This young Korean woman offered God more tears and more fragrant perfume than Mary Magdalene of Jesus' time.

According to the government document (Sungjongwon Diary) the 21-year old Agatha was taken out to a place called Tangkogae near Seoul and beheaded there on January 31, 1840, with five other Catholics.