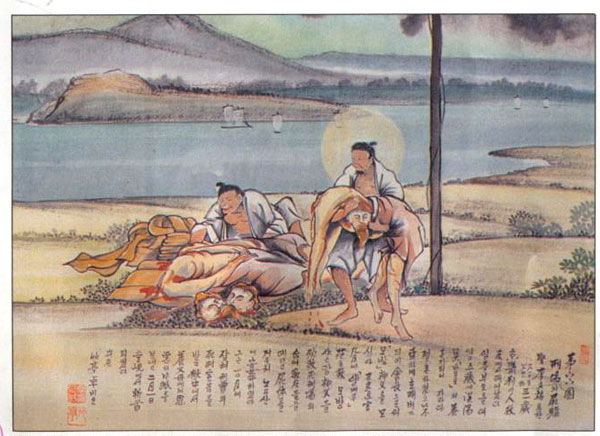 Yi Mun-u John was born in Ichon in Kyonggi Province to a Catholic noble family. When he was five years old, his parents died. A very devout Catholic woman adopted him and took him to Seoul. John didn't want to get married, but his foster mother insisted that he marry. After John's wife and two children died, he led a single life and dedicated himself to charitable activities and to helping the missionaries and the Catholics. John accompanied Father Maubant on his mission visits. During the persecution of 1839, John used to take up collections to help the imprisoned Catholics. He risked his life to keep the missionaries hidden in the mountains and informed them about what was going on. He also risked his life to bury the bodies of Bishop Imbert and Fathers Maubant and Chastan. Then he planned to escape to a remote area.

Before John could escape, he was arrested in the house of a friend on November 10, 1839. The interrogator asked John why he would give up his noble status and die as a Catholic. John insisted that he could never deny God, the Creator and the King of kings. The interrogator tried to persuade John to surrender his faith, treating him with good food and wine. Since the interrogator's effort failed, John was tortured and put in prison with robbers and apostates. He used to admonish the apostates, and bravely testified to his faith.

John wrote a letter in prison six days before he was martyred. The letter clearly described what was going on in the mind of a martyr before death. The abridged content of the letter is as follow:

"How happy I am to be with my friends of faith! I thank God for this happy reunion.... This world is just a moment, and bodies are vain. Look at a body ten days after its soul has left it. How miserable and gruesome it is with a stinking odor! But people pay more attention to their bodies and don't care about their souls. These people are like animals. Animals have no souls to be saved. How miserable it is for men, having souls to be saved, to live like animals!... Fight three enemies, the devil, the world and the body. The most dangerous one of the three is the body.... We can examine ourselves through meditation and prayer. Ask the Blessed Mother Mary for her intercession. She is so kind and wonderful to all of us.... This is the last moment of my life. If you pray together, there will be no danger. You must not be afraid of death. Don't make Our Lord, Who wants to save all souls, disappointed. After you go through all the sufferings and trials, you will be able to enter the eternal happiness and joy in Heaven.... This is the letter I write for the last time in my life."

On February 1, 1840, at the age of 31 John was taken out to Tangkogae near Seoul(in Seoul today), and was beheaded there with two other Catholics. The government record verified this fact.