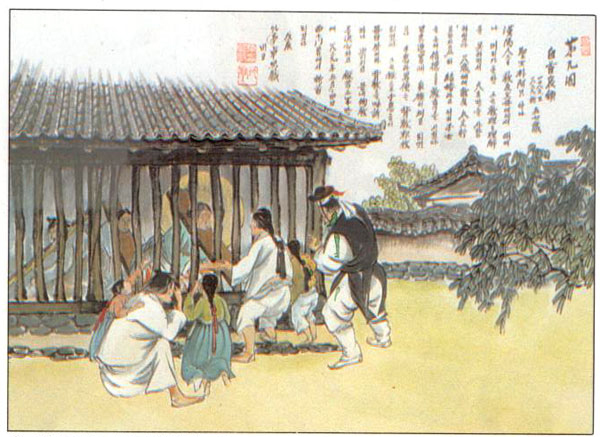 Among the martyrs were not a few who had to turn their backs on their families and cut ties with them to follow the Lord. Pak A-gi Anne was one of them.

Mindful of these words, Pak A-gi Anne suffered the pain of severing her ties with her beloved family in order to win the glory of martyrdom.

Pak A-gi Anne was born into a Catholic family living in a small village on the banks of the Han River. She was not very intelligent and had difficulty learning the doctrine and prayers, but she had a heart full of love for God. She always said, "I cannot know God as much as I would like but I can try to love him with all my heart."

At the age of eighteen she married T'ae Mun-haeong Francis and bore him two sons and three daughters. She brought up the children well, teaching them the virtue of faith. The family was not wealthy but tried to live justly.

Pak A-gi Anne had a special devotion to the Passion of Our Lord and she meditated on His five wounds with tears in her eyes. When she heard of others being arrested and suffering torture she explained to the children about the martyrs and expressed her hope of martyrdom. In March or April of 1836 she was arrested along with her husband and her oldest son, ung-chon.

Her husband and son, unable to withstand the torture, apostatized but, despite the monstrous torture to which she was subjected, Pak A-gi Anne steadfastly gave witness to her faith. Greater than the physical pain of torture was the pain of seeing her husband and son, who had been released after their apostasy, return daily to the prison and plead with her to follow their example. They told of the plight of the family without her, the anxiety of her sick mother-in-law and the cries of the younger children for their mother. Listening to these stories gave Pak A-gi Anne immeasurable anguish.

With one word she could deny her faith and become again a warm mother to her distraught children, a devoted wife to her sorrowing husband and a dutiful daughter-in-law to her elderly mother-in-law, bringing peace and happiness again to her whole family.

But Pak A-gi Anne bravely overcame this temptation. In tears she rejected the pleas of her family to apostatize and pleaded with them to repent their own apostasy.

Some of her friends, aware of the sad situation at home, came to the prison and tried to persuade her. Pak A-gi Anne listened to them and then replied, "Is it worth the risk of eternal death in order to live a few more days? Instead of urging me to renounce my faith you should repent. You should envy me my good fortune."

The prison guards also urged her, "Your husband and son have been released and returned home. With just one word you can do the same. You must have a heart of stone to be unmoved by their pleas. Do you have many lives to live?" Pak A-gi Anne replied, "My husband and son's apostasy is their business. What has it to do with me? I have decided to keep my faith and die for it."

Even though she was beaten until her flesh hung loose and bones showed through, Pak A-gi Anne persisted in kneeling in prayer. Finally the commissioner realized he could not change her so he had her transferred to the court prison. There she underwent further torture. The judge put the same proposition to her as did the others, "Your husband and son have been released. With one word you, too, can enjoy the same happiness." Pak A-gi Anne replied, "To each his own. My desire is to die for the Lord."

After three years in prison, Pak A-gi Anne was sentenced to death on May 10, 1839, "for reading erroneous books and carrying evil pictures." Anne was finally taken outside the Small West Gate and beheaded there with eight other Catholics on Friday, May 24, 1839. She was 57 years old when she was gloriously martyred. Pak A-gi Anne was canonized on May 6, 1984 at Yoido Plaza, Seoul, by His Holiness Pope John Paul II.