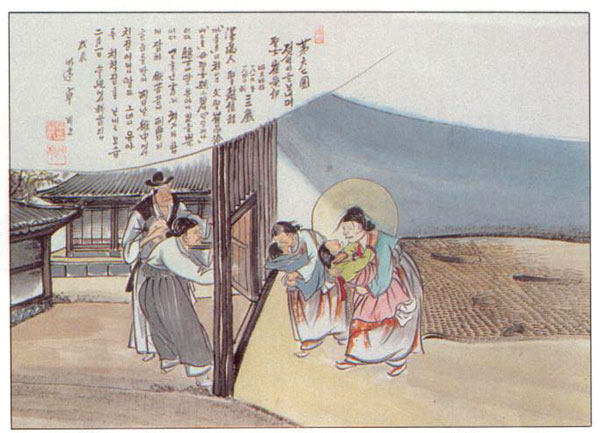 Choe Yong-i Barbara was a daughter of Son So-beok Magdalene, one of the 103 Saints. Barbara was very devout from the time she was a young girl. When her parents tried to arrange her marriage, she said that the spouse she wanted must be a very devout Catholic. She said that she did not particularly care for a noble or rich husband. So she married a much older man, 44-year old Cho Charles. Barbara was 20 years old at that time. The next year she gave birth to a son. The couple encouraged each other in virtue and practiced their religion faithfully.

When Barbara was arrested, she took her son with her to prison. It was very hard for the infant to stay in prison. It was dirty with neither fresh air, sufficient light nor enough food. So Barbara sent her son to one of her relatives. She was afraid that she might be discouraged from being steadfast to her faith because of her son.

The interrogator asked her to give up her faith and to reveal the names of her fellow Catholics and of the owner of the religious articles found in her house. Barbara would not deny God and said that she was too young to know her fellow Catholics, so she was severely tortured. She was beaten 250 times and her body was twisted.

She wrote a letter in which she said: "How sad I am to lose my parents in martyrdom! But when I think of Heaven, I am consoled and thank God for the special privilege of martyrdom. I am full of happiness in my heart!"

On February 1, 1840, Barbara was taken to Tangkogae near Seoul and was beheaded there with Yi John and Hong Paul. Barbara was 22 years old when she was martyred. On the previous day Barbara's mother had been martyred. According to the Korean law of those days, relatives were not supposed to be killed on the same day.