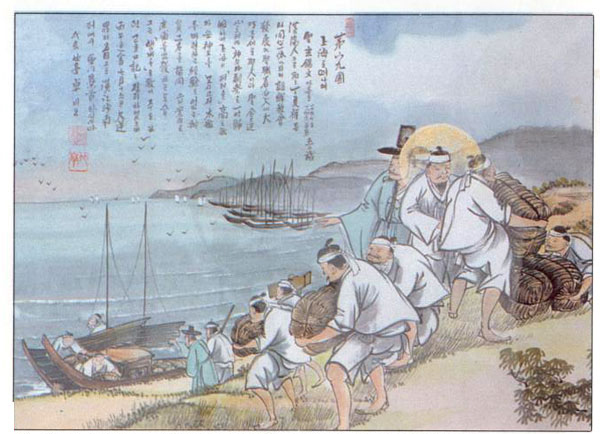 Hyon Song-mun Charles was beheaded three days after Father Kim Andrew. Charles is the one who introduced Bishop Imbert into Korea and helped Father Chastan get around to different mission stations.

He was born in Seoul in 1799. His father was martyred in 1801 and his wife and children died in prison in 1839. His sister, Hyon Benedicta, was also martyred later. Charles dedicated his whole life to helping the missionaries and the Catholics. The Holy See's document praised him, saying: "His contributions are many, and he had high virtues and a warm, gentle, simple personality."

In 1838. when the persecution started, Charles wanted to give himself up to the government authorities to testify to his faith but the missionaries stopped him from doing so and told him to remain alive to take care of the Catholics. Bishop Imbert, before his martyrdom, entrusted the Korean Church to Charles. This fact shows how highly the bishops and the Catholic people regarded him. Charles encouraged the new Catholics and went around to different mission stations to take up collections for poor people and to take care of the spiritual life of the people.

When the persecution was over, he edited short stories of the martyrs (Kihae Diary) for distribution among the Catholics. He sent messengers to Peking frequently to have contact with missionaries. He accompanied Father Kim Andrew on his stormy voyage to Shanghai in a small wooden boat. After he returned to Seoul, he risked the danger of having Father Kim's house registered in his name. When Charles heard of Father Kim's arrest, he moved all the church money and properties to a new house he had bought.

A few days later the police easily captured Charles in his new house. The porter who transported Charles' cargo led the way for them. When the captors rushed into the house, they found Kim Theresa, Yi Agatha, Chong Catherine, U Susanna and a few other women. It was July 10, 1846. All of them were arrested together. In prison Charles encouraged his fellow prisoners.

Some say that Charles was severely tortured, and others say that he was exempt from torture. In any case, he was sentenced to be beheaded. According to the government record (Hyonjong-shillok), Hyo Song-mun was sentenced to be beheaded on September 19, 1846 (July 20 according to the lunar calendar). Another government record (Sungjongwon Diary) shows the same thing.

Charles was beheaded in Saenamt'o on September 19, 1846 and he died peacefully and courageously according to the testimony of Kim Catherine. He was 50 years old when he was martyred.