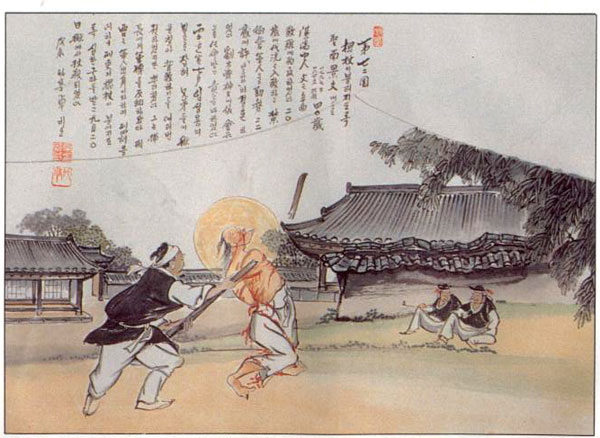 Nam Kyŏng-mun Peter was born in Seoul in 1796. When he was young, he was a soldier, and later he worked as a vendor of salted clams. Peter married Ho?Barbara when he was 22 years old. He was converted by Pak Peter and baptized.

Before Peter knew about the Catholic doctrine, he practiced high interest usury. When Father Yu Pacificus told him that it was against Church ethics, he stopped the immoral practice and returned all the interest he had received. Then he accompanied and helped the missionaries visiting mission stations to administer the sacraments.

In 1839, he was almost caught by the police, but his pagan brothers helped him to escape. After the persecution was over and there were no missionaries, he neglected practicing his faith for two or three years. In either 1844 or 1845 he decided to amend his life, and he repented his past sins. Peter thought that the only penance he could do was to become a martyr. As a penance he got up before sunrise every morning and offered prayers for many hours. He lived and slept in a cold unheated room. Because of this he became ill but he considered it a special grace of God and did not complain.

Peter was known as an outstanding Catholic, and finally he was arrested in July of 1846. His wife tried to stop him from getting caught, but he told her that he could live no longer.

While Peter was in prison, one of his brothers sent some food and clothes in to him, but as a penance he refused them. He was afraid to meet his visiting brothers because he thought his faith might be weakened. During one of the tortures, he returned his military name tag, indicating that he once was a soldier. On another occasion the police chief hit him with a club so hard that the club broke on his shoulder.

Some of his best friends tried to persuade him to give up his faith, but he would not give in. He was beaten again and again and was told to reveal the location of his fellow Catholics, but he gave only the names of deceased ones. He endured many severe tortures.

Peter and six other Catholics were finally beaten to death on September 20, 1846, according to the government document (Su?gjo?gwo? Diary). They might have been strangled. According to Archbishop Mutel's testimony, they were originally sentenced to be beaten to death, but those who didn't die from the beating were actually strangled to death later. Peter was martyred at the age of 50.