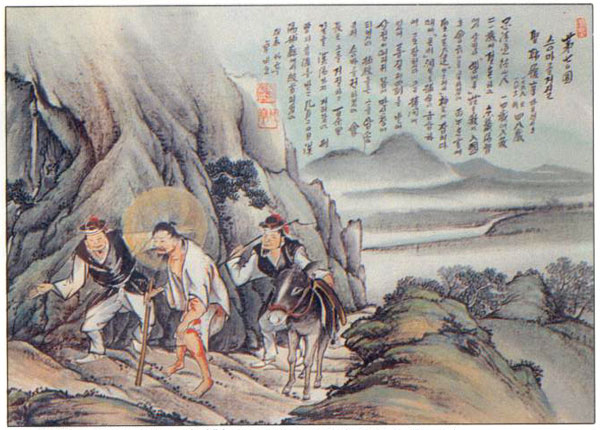 Han I-Hyŏng Laurence was born to a noble family in Doksan in Ch'ungch'ŏng Province. He had a strong character and a spirit of self-sacrifice. He studied catechism when he was 14 years old. A few weeks later Laurence became a very devout Catholic. He spent many hours in front of a crucifix meditating and repenting his past sins. Every Sunday and on all holy days of obligation he went to the mission chapel four kilometers away for prayer, regardless of bad weather. During Lent he fasted everyday. When he was 21 years old, he married a Catholic woman and lived in a remote rural area near Yangji.

He was very good not only to God but also to his neighbors, particularly poor ones. He fed poor people in his home and gave them his own clothes. He used to say that God would reward him for his acts of charity.

Bishop Imbert made him a catechist. He was well qualified for the post in knowledge, virtue and good example. He fulfilled his duty satisfactorily.

After Father Kim Andrew was arrested, the captors tried to arrest the Catholics connected with him. Han Laurence was arrested accidentally. He was ridiculed and severely beaten. The captors stripped him naked and hung him from the ceiling. Then they beat him cruelly, commanding him to deny his faith and to reveal the whereabouts of his fellow Catholics. Laurence refused to do so. His captors bound his legs, put broken glass and dishes between his feet, and sawed them with a thick rope, but Laurence endured all the pains admirably. Even his enemies praised him very highly. On his way to Seoul, he refused the horse offered by his captors. He walked the 52 kilometers of rough road with bare feet because of the wounds in his feet.

According to the government record (Sŭngjŏngwŏn Diary), Han Laurence and four women were severely tortured but refused to give up their conviction. They were beaten to death on September 20, 1846. It is possible that Laurence could have been strangled, because, according to the testimony of Archbishop Mutel, they were originally sentenced to be beaten to death, but if they didn't die immediately, they were actually strangled to death. Laurence was 48 years old when he was martyred.