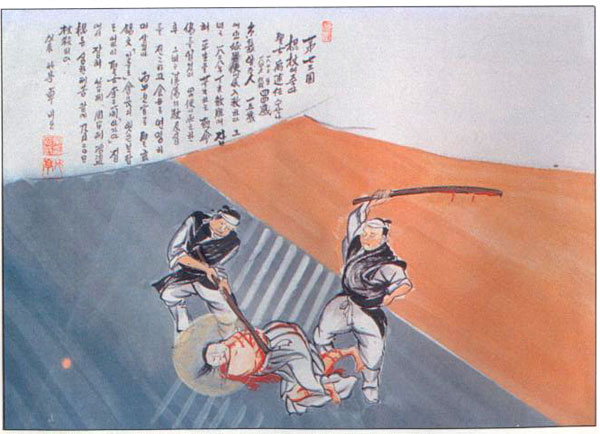 U Susanna was born the daughter of a pagan noble family in Yangju in Kyonggi Province. At the age of 15 she married a man of a Catholic family in Inch'on, and then she became a Catholic.

In 1828, she was once arrested, put in prison for some weeks and severely tortured. But, as she was pregnant, she was released and sent home. The wounds from the torture caused her a lot of pain throughout her life.

In 1841, her husband died and she came up to Seoul. She worked as a servant for various families. She became a close friend of Yi Catherine, who later became a martyr, too. Susanna was very devout in prayer and voluntarily wanted to do servile work for the love of God. She used to say that the only thing she regretted was that she missed the occasion of martyrdom, but God provided her another opportunity.

On July 10, 1846, Susanna was arrested with Kim Theresa, Yi Agatha and Chong Catherine at the new home of Hyon Charles. They were in prison for over two months and suffered many severe tortures. On September 20, 1846, Susanna and six other Catholics were beaten to death, according to the document of the government (Sungjongwon Diary). However, they could have been strangled to death. Susanna was 44 years old when she was killed